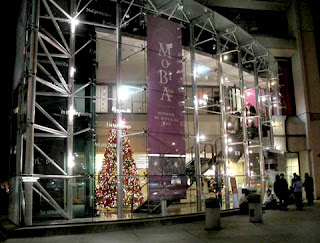 Not that there's anything wrong with lending your prestige to an entity that hasn't filed tax returns for the last two years, is controlled by the seemingly right-wing American Bible Society, and whose chair, Roberta Ahmanson, is half of an Evangelical power couple who continues to deny, sort of, that she advocates an official American theocracy. 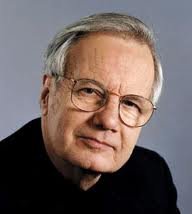 That's what PBS luminary Bill Moyers (right) and former Met director Philippe de Montebello (below left) will be doing come May 2, when they'll preside as the honorary co-chairs of a fundraising bash for said entity, the Museum of Biblical Art in Manhattan.

Moyers, one sometimes forgets, has a master's of divinity degree, and he's hosted several television programs on religion.  De Montebello, of course, headed up a museum that has boatloads of Christian biblical art. 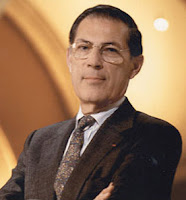 Besides, they both have a professional relationship with the gala's honoree, William F. Baker (below right), former president and now president emeritus of WNET, New York's PBS television station, which hosts de Montebello's Sunday arts program and has aired various incarnations of Moyers' programs.

MoBIA is honoring Baker with its first Visionary Award for "his creative leadership in the world of art and religion."  He produced the PBS film "The Face:  Jesus in Art" and its follow-up, "Picturing Mary." 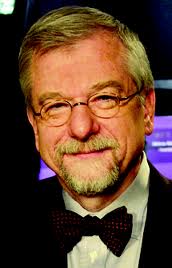 He's also one of MoBIA's founding and current trustees, a board membership conspicuously absent from his lengthy bio on WNET's website.

Some facts to chew on when these culture hotshots rustle up the bucks for MoBIA next week:

Although a separate organization, MoBIA is really an arm of the American Bible Society, whose mission, to quote its tax filings, is "to make the (Christian) Bible available to every person in a language and format each can understand and afford, so all people may experience its life-changing message."  In those same filings, the American Bible Society identifies MoBIA as a "controlled entity," meaning that the Society either has the power to appoint the majority of MoBIA's trustees or the Society's own employees or trustees are a majority.

Rathbun's also president of the Christian Legal Society.  Its first objective is "to proclaim Jesus as Lord through all that we do in the field of law and other disciplines."

The American Bible Society gives MoBIA substantial ongoing financing.  According to MoBIA's most recent filing, the Society provided $1.3 million of MoBIA's $1.8 million in revenues.  In its last filing (for fiscal year 2010), the Society's return lists $1.6 million in financial support and in-kind services. 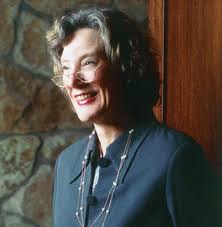 And then there are Howard and Roberta Ahmanson, who have been dogged by their support -- now somewhat tempered -- for the reviled Christian Reconstructionist R.J. Rushdoony, who advocated the imposition of Christian law and the stoning to death of homosexuals.

The Ahmansons are also, as quoted in a recent Christianity Today feature, the self-described "single largest supporter" of the "Intelligent Design" movement, "and have been from the beginning."

According to the Chronicle of Philanthropy, the Ahmansons gave MoBIA $1.2 million in 2009 -- somewhat less than the $1.395 million they donated, according to the San Francisco Chronicle, through their company Fieldstead to the passage of California's anti-gay-marriage Proposition 8.  MoBIA's website acknowledges their continuing support.

If you don't like the sound of this but still want to see MoBIA's art exhibits, some of which are very good indeed, admission is pay what you wish, perhaps because it gets funds from New York City via City Council grants and the Department of Cultural Affairs.  DCA's website shows an award of $98,400 for fiscal 2011.

In the meantime, maybe Moyers or de Montebello can goose MoBIA into filing its 2009 and 2010 tax returns.

Photos have been pulled from the internet.
Posted by laura at 2:43 PM