That's what you didn't read about in the press reports of last week's Old Masters sale at Sotheby's.  Auction house sales are usually covered as an economic narrative.  The overarching story takes the pulse of the market, and within it are smaller hyped-up dramas.  Last week's concerned Hendrick Goltzius's Jupiter and Antiope.  Would the sale price meet its $8-$12 million estimate?  No, it did not!

For the art lover, though, the real story occurs in the five days before the art is auctioned.  That's when it's displayed in Sotheby's galleries for viewing by collectors and the public alike.  Once the paintings are taken down and moved to the auction block, who knows if you will ever see them again?

Here are just a few of the treasures you could have seen last week: 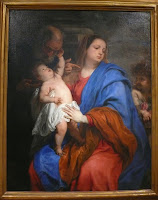 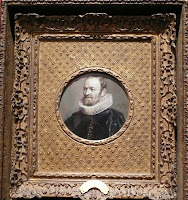 Van Dyck's Portrait of Nicholas Rockox, a stunner that's atypically small -- just a little more than 6 inches in diameter -- in a knockout frame (bought for $1.5 million), and the same artist's glorious Holy Family with Angel, a painting that, according to Sotheby's catalogue, "reappeared" in 2007, nearly 25 years after it was last seen (bought for $1.98 million). 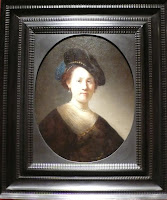 Rembrandt's Portrait of a Young Woman, a beauty showing the artist as adept at sympathizing with women in his tight, luminous portrait style of the 1630 as with men.  (At the last minute this painting was pulled from the auction for undisclosed reasons.) 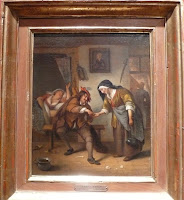 The Procuress by Jan Steen, a small, uncomplicated genre scene by one of the most joyful of the Dutch "little masters" (bought for $386,500). 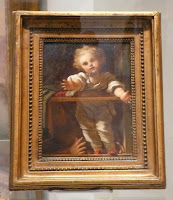 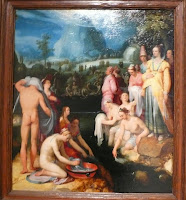 Cornelis Cornelisz. van Haarlem's Purification of the Israelites, an example of Northern Mannerism at its best (estimated to bring $400,000-$600,000; unsold). 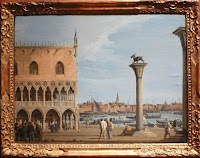 Canaletto's The Piazzetta, yet another view of Venice showing the artist's mastery of detail, in beautiful condition (bought as one of a pair for a total of $3.89 million).


Andrea del Sarto's Madonna and Child (estimated to bring $2-$3 million; unsold), and the demure Magdelene Writing a Letter by an unknown 16th-century artist referred to as the Master of the Female Half-Lengths (bought for $326,500). 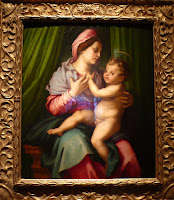 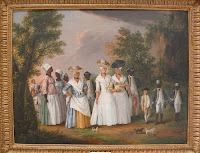 And finally, this interesting painting of Creole women and their servants by Agostino Brunias, who accompanied a colonial British governor to Dominica and made art for the landowning and probably slave-owning class (estimated to bring $200,000-$300,000; unsold).

Another marvelous aspect of these exhibitions:  The art is hung to be looked at, the center of the paintings at eye level, so you don't walk out with the neck strain that is often the plague of museum-going.

Check back to Art Unwashed for previews of future sales.

Photographs by Laura Gilbert.
Posted by laura at 5:40 PM