Here are the hot New York museum shows this autumn. 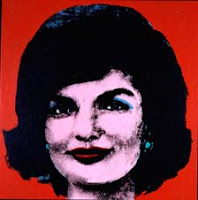 Regarding Warhol: Sixty Artists, Fifty Years, Metropolitan Museum.  With the season's surefire hit, the Met steps into an uncharacteristic role, that of writing contemporary art history.  The show takes on Warhol's influence on artists who are actually alive -- grouped around such themes as celebrity and repetition -- and features creaky standbys Jeff Koons, Alex Katz, and Richard Prince but also artists we don't see enough of like Vija Celmins.  Opens September 18.

Bernini: Sculpting in Clay, Metropolitan Museum.  The greatest sculptor of the 17th century -- and perhaps the greatest master of public art -- made small clay models for his statuary, and the Met is gathering together 50 of them, including some for his fountains scattered about Rome and the angels along one of Rome's bridges. Opens October 3.

Mantegna to Matisse: Master Drawings from the Courtauld Gallery, Frick Collection.  Sixty drawings over a 500-year period sounds ridiculous, but this show presents the greatest hits from a great English collection by the masters of the craft -- Michelangelo, Leonardo, Rembrandt, and Cezanne among them -- both sketches and finished works.  The Rubens at top is a luscious mix of sensuality and modesty, as he depicts his young wife lifting her veil.  High expectations seem sure to be exceeded.  Opens October 2. 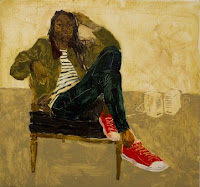 Fore, Studio Museum in Harlem.  Every few years the Studio Museum puts together a show of emerging artists of African descent living and working in the U.S.  This year's show of 29 artists -- including Jennifer Packer (whose work is shown at left) and Toyin Odutola -- looks like a winner.  Opens November 8.

Martha Rosler, Meta-Monumental Garage Sale, Museum of Modern Art.  Haggle with a real artist!  Rosler, MoMA's staff, and the public have donated stuff to be sold in the museum's atrium the last two weeks of November.  Rosler, reputed to be a hard bargainer, has held garage sales several times before -- first in San Diego in 1973 and then in various European cities -- but MoMA's will be the largest.  Expect to be elbowed by serious buyers.  November 17-30. 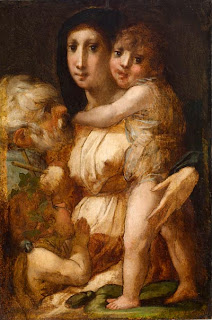 Fantasy and Invention: Rosso Fiorentino and Sixteenth-Century Florentine Drawing, Morgan Library.   The Morgan is showing approximately 20 drawings by the likes of Bronzino and Pontormo from its own collection, but the real draw is a painting of the Holy Family with the Infant St. John the Baptist (left) on loan from the Walters Art Museum in Baltimore, one of only three paintings in the U.S. by this major Mannerist artist.  Opens November 10.

Images from the museums' websites.

On View in Brief: Summer Loans to the Met, Including a Van Dyck Sold Last Year for $1.1 Million

It's the annual Invasion of the Briefly Loaned Old Masters, the season when private, mostly anonymous individuals send some of their finest paintings to the Metropolitan Museum.  Whether the owners are off on holiday or renovating their homes, they've decided to let the rest of us see these works on the walls of the Met.

Leading the way this year is a magnificent portrait sold as a Van Dyck last year at Sotheby's in London for more than $1.1 million.

In the 1950s and 1960s, the museum had annual exhibitions called something along the lines of "Paintings from Private Collections:  The Summer Show."  You can see references to them in auction house catalogue giving a work's exhibition history -- no doubt about it, a museum exhibit gives the work not just cachet but added value as well, though some lenders undoubtedly shuttle paintings to the Met for safety's sake and out of generosity.

The museum no longer puts on these official summer shows, and it's also stopped making available a list of the summer loans and where the visitor could find them scattered about the museum, a practice that survived at least into the 1990s.

Now it takes a bit of sleuthing to discover them.  Here's a guide to this summer's highlights -- so far:

Anthony Van Dyck, Portrait of a Carmelite Monk, 1617-1620.  The glint of light in the eyes, the visible brushstroke, the creamy flesh tones -- this work has all the marks that make 17th-century painting so splendid.  Add to these the awkward-looking ears and the bold blocks of color, and the painting looks remarkably modern.

Van Dyck has always been recognized as extremely precocious, and the dating of this work puts it when he was perhaps all of 20 years old and still in Rubens' workshop.  This portrait had in fact previously been attributed to Rubens.  Sotheby's, which sold the painting, has a nice video about the reattribution here.

Giorgio Vasari, Pieta, 1549.  The fame of Vasari's Lives of the Artists, the foundational history of Renaissance art and artists, obscures his importance as . . . an architect -- he designed the Uffizi Gallery in Florence.  Those familiar with his hack work as a painter may wonder how he could ever have ousted Bronzino as the Medici court artist.  His Pieta, a "recent rediscovery," as the label informs us, is unlikely to change anyone's mind -- it's displayed in the same gallery as the Met's Bronzino -- but it's an engaging and intimate work of classicism that, following a Gospel text, shows the sun and moon in the same night sky.

Mirabello Cavalori, Madonna and Child with St. Anne and the Infant St. John the Baptist, ca. 1570.  Cavalori is not a familiar name, but judging from this work it's perhaps a name to be reckoned with.  What makes this painting remarkable, aside from its being a noteworthy example of Florentine Mannerism, with its cool unnatural colors and twisting and elongated figures, is that a glance at St. John shows that he is hardly the "infant" of the title but more akin to the tweener St. Johns that Caravaggio would paint a couple of decades later.

Fewer than a dozen works are attributed to Cavalori, and if the attributions are correct, the Met now has three of these rare works in one gallery, including a second loan from the same anonymous owner (who has, all told, parked four paintings at the Met, including the Vasari.)

Jusepe de Ribera, Sts. Peter and Paul, ca. 1613.  A European collector has loaned this work, thought to be an early one by the Spanish master and painted in Rome, where Ribera was absorbing all things Caravaggio.  It's displayed in one of the Met's Spanish galleries but could be more profitably shown next to Caravaggio's religious paintings about ten galleries away.

Eugene Delacroix, Christ at the Column, 1849.  This small painting has been loaned by longtime Met patron Wheelock Whitney III. Let's hope it lands at the Met permanently.  The museum has what might be euphemistically described as a tedious overabundance of Corots and Courbets.  If this work were donated, it would strengthen the Met's weak holdings in great French Romantic painters like Delacroix.

This year's lenders hardly rival in the number of works loaned the magnificent spoils of a New York collector who permitted seventeen paintings she owned to grace the museum's walls a few summers ago (there was reputedly an eighteenth work, but I never could find it), but in quality they aren't far behind.

A Small Spectacular: Bartolo di Fredi and Other Sienese Artists at the Museum of Biblical Art. Exclusive Photos Here, Article at Observer.com

It's the must-see yet unsung show of the summer -- a tightly focused exhibit of 14th-century Sienese altarpieces -- and it's at one of Manhattan's under-visited jewel-box spaces, the Museum of Biblical Art on Broadway near Lincoln Center.

The exhibit, with only seven works, is stunning in its simplicity and beautifully conceived, and it shows off one of this museum's strengths -- displaying art that is either new to the viewer or placed in a context that makes it seem new.

For this show, the museum is emphasizing an uninterrupted viewing experience.  "We didn't want a lot of text on the wall where people are reading instead of looking," said acting executive director Patricia Pongracz, so MOBIA, as the museum is known, provides a free take-it-home handout that identifies the figures in each work and includes the religious text it is based on.

Bartolo's altarpiece demonstrates something that is often overlooked in narrative religious imagery -- telling a story to people who don't know how to read.  The artist, for the first time, depicted with the Adoration four narratives of the kings' journey across the upper part of the painting.

Become one of them.  The exhibition is free.

Read more about the difficult-to-obtain loan from Siena -- which involves antiquities smuggling -- and about the exhibition and museum in my article in today's New York Observer, here.

"Bartolo di Fredi, The Adoration of the Magi: A Masterpiece Reconstructed," Museum of Biblical Art, Broadway at 61st Street, through September 9