Egypt's Newest Antiquities Chief Submits Resignation, Saying He Will Not "Be Regarded As A Stooge" 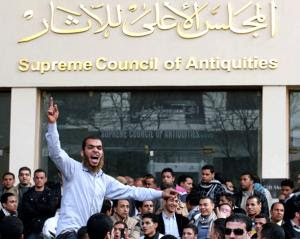 After little more than a month in office, Mohamed Abdel Fatah submitted his resignation on Tuesday as Egypt’s antiquities chief – the formal title is Secretary General of the Supreme Council of Antiquities -- according to various reports from the Middle East.
Abdel Fatah, apparently the latest casualty in the scandal-ridden country which is in the midst of a revolution, cited as one reason the intensification of protests in Egypt – which has put “all archaeological work on hold.”
Profiteering?
He made the statement to the Egyptian newspaper Ahram, which published it approximately Friday, New York time.  He said he was also outraged by his lack of authority to make any decisions without the approval of current Prime Minister Essam Sharaf.
The recent protests in Egypt – which saw the breaching of the concrete wall around the Israeli Embassy -- have included protests in front of the Supreme Council of Antiquities (the SCA).
Egyptian demonstrators demanding salary raises and the appointment of new graduate archaeologists have blocked entrance to the SCA headquarters and caused the closure of several buildings.
People behind the protests are “profiteering from accelerating such protests to create chaos that stops archaeological work from proceeding properly,” Abdel Fatah claimed to Ahram.
At one point the Council reportedly called the military police to remove the demonstrators.
“Conditions have become chaotic, and I am afraid to say that the SCA is now completely paralyzed,” the Agence France Presse quoted Abdel Fatah as saying.
Stooge
“The load on me was unbearable,” he told the official Middle East News Agency.  “I refuse to be regarded as a stooge. . . . I felt powerless and overwhelmed especially that I had been deprived of much of my authority.”  As an example, he said he could not authorize the payment of $50 as compensation to an archaeologist whose leg had been amputated.
The SCA oversees the country’s ancient monuments and all archaeological work and plays a key role in Egypt’s tourist industry, which has declined dramatically since last February’s toppling of  Hosni Mubarak and the continuing, often violent turmoil in Egypt.
Abdel Fatah was appointed in August to replace the famed wildman-hustler Zawi Hawass, who resigned soon after the Mubarak government fell amid allegations that he was too close to the Mubaraks.  Hawass was later reappointed, and then ousted in July.
Hawass was known for stifling discourse within Egypt while quite successfully  promoting himself – with appearances on the Discovery cable-TV channel, for example, and taking credit for sensational and sometimes dubious discoveries, like unearthing the very chariot from which King Tut had taken a fatal tumble.
He was also remarkably persuasive in convincing institutions in other countries, including the Metropolitan Museum, to return antiquities to Egypt, causing some to question whether the Met had lost its marbles in addition to its antiquities.
Hawass is currently facing an official Egyptian investigation on corruption charges, as are so many others in the former dictatorship.
Will Abdel Fatah reappear as antiquities chief the way Hawass did?  On Friday Ahram reported that the cabinet had refused Abdel Fatah’s resignation and had scheduled a meeting with him today.
Photo of protest from Egyptian Gazette.  Other photos pulled from the internet.
Text copyright 2011 Laura Gilbert
Posted by laura at 9:24 AM 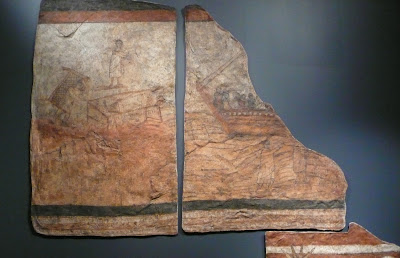 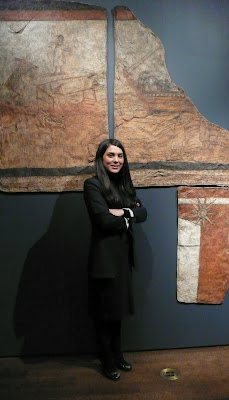 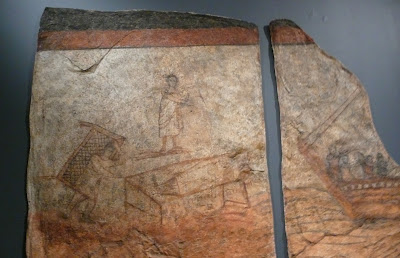 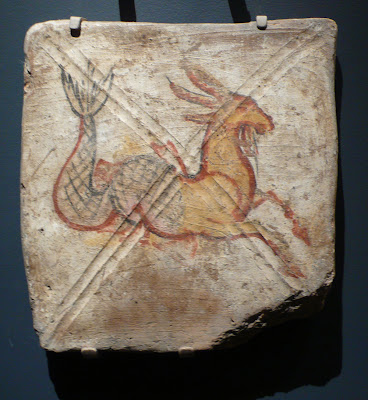 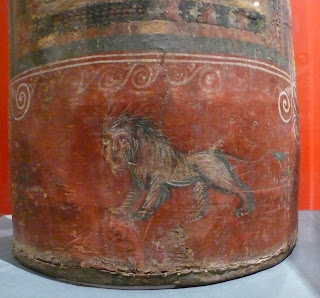 Email ThisBlogThis!Share to TwitterShare to FacebookShare to Pinterest
Labels: dura-europos, institute for the study of the ancient world 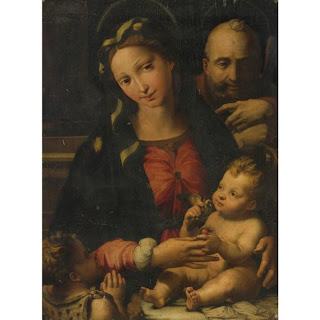 Last January the Metropolitan Museum set records at Sotheby’s two days in a row when it bought a drawing by Perino del Vaga (1501-1547) for more than $700,000 and a painting by the same artist for more than $2 million.
Two million dollars, by the way, is the amount of the Met’s expected shortfall for fiscal year 2011 -- a shortfall, the museum’s chief spokesperson told reporter Lee Rosenbaum in June, that in part led to the Met’s increasing its recommended admission from $20 to $25.
Both works are finally going on display beginning September 27 in a small show devoted to Perino that will include drawings from the Morgan Library and private New York collections in addition to the Met’s own stash. 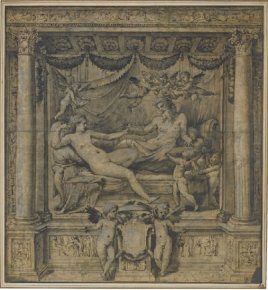 Perino, hardly a household name, was a student of Raphael’s in Rome.  There are only a handful of panel paintings attributed to him.
The Met’s painting, “The Holy Family with St. John the Baptist,” is a “newly discovered” work and has been described as atypical of the artist.
Apparently, though, the museum had a lot of company in accepting either the attribution or the painting’s intrinsic worth.  Five buyers, one of which was reportedly the Louvre, bid it up from its $300,000 to $400,000 estimate.
The drawing is a study for a tapestry, the specialty of Met director Thomas Campbell.
It’ll be a homecoming of sorts for the guest curator, Linda Wolk-Simon, who was formerly a curator at the Met and is now head of prints and drawings at the Morgan.
Frankly, when I saw the painting at Sotheby’s auction preview I wasn’t too impressed -- it looked like a dingy old thing.  Maybe we should be relieved that after cleaning and restoring it the Met did not announce it had discovered yet another Velazquez.
Photos:  Top, pulled off the internet; bottom, from Sotheby's catalogue.
Text copyright 2011 Laura Gilbert
Posted by laura at 11:57 AM

Renaissance Portraits, de Kooning, and Smarty-Pants Cattelan: The Shows New York Will Be Talking About

The hot shows in New York as a cold winter approaches: 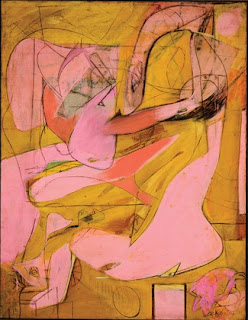 The biggest show of the fall, in more ways than one, is the seven-decade retrospective of Abstract Expressionist de Kooning.  He didn’t have a clue about how to live – he spent a lot of time in alcoholic blackout -- but sure knew how to paint.

With more than 200 works – about four times as many as the last museum retrospective, at Washington's National Gallery in 1994 -- this is the first show to occupy MoMA’s entire 6th-floor gallery space, all 17,000 square feet.  It’s put together by peerless MoMA curator emeritus John Elderfield, and the museum is promising “the most comprehensive book on the artist yet.”
The Renaissance Portrait from Donatello to Bellini, Metropolitan Museum, opening December 21 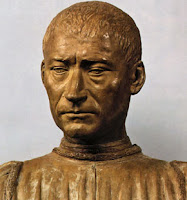 People are now lining up to see “The Renaissance Portrait” at Berlin’s Bode Museum, and its opening a week ago received worldwide coverage.  For good reason:  The combined heft of the Bode and the Met has secured loans of 15th-century Italian paintings and sculpture from more than 50 institutions.

Met curator Keith Christiansen -- who, by the way, got $1.2 million in compensation for fiscal year 2010 -- described to the AP the challenge of Renaissance artists’ “rediscovery” of portraiture: “The artists who painted independent portraits for the first time confronted the issues of what a portrait is about: Is it about commemoration, is it about celebration of beauty, is it about social position, rulership, identity?”  The results are stunning, as is the curator's compensation.

According to Christiansen's office, the Leonardo "Lady with an Ermine," which is part of the Bode show, will not be coming to New York.  It's traveling to London instead, for the Leonardo extravaganza there.
Ingres at the Morgan, opening September 9, and David, Delacroix, and Revolutionary France: Drawings from the Louvre opening September 23, Morgan Library
The seventeen drawings by Ingres, one of the greatest draftsmen and portraitists of all time, will include his large, jaw-dropping "Odalisque and Slave" (below) and numerous portrait drawings.  The Morgan will also be presenting a whopping 80 drawings on loan from the Louvre by some of the best French artists of the late 18th and 19th centuries. 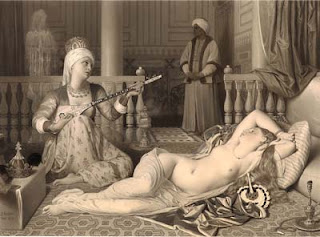 After that, you can hop up to the Frick and see this staid institution gingerly enter the 20th century with Picasso drawings from 1890-1921 (opening October 4).  Even if you think you’ve seen all the Picasso you can stand, it should be worth the trip – the Frick’s small shows are so intelligently put together, they rarely let you down.
Infinite Jest:  Caricature and Satire from Leonardo to Levine, Metropolitan Museum, opening September 13 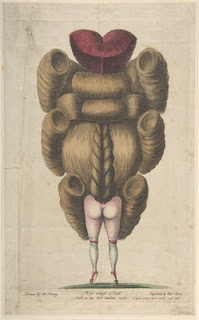 What we need in this age of political and economic absurdity is a big laugh at the expense of those responsible.  The Met may deliver, or at least provide some comic relief, with this show of 164 works on paper – five centuries’ worth -- that mock fat cats, fashion, politics, art, eating and drinking, and powerful people who make life miserable for the rest of us.  Included are works both by geniuses like Leonardo, Goya, Daumier, and Hogarth and by anonymous commentators who were just fed up.  The one loan in this exhibit is a David Levine drawing of Claus Oldenberg’s head as a toilet, with everything else from the Met’s rich storehouse.
Art of Arab Lands, Turkey, Iran, Central Asia and Later South Asia, Metropolitan Museum, opening November 1 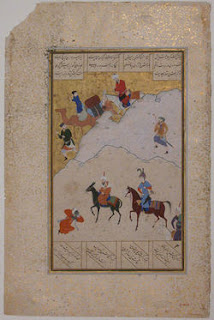 After eight long years, the Met’s collection of Islamic art will finally be back on display. Fifteen new galleries with art from a vast geographic territory will be filled with splendor:  ceramics, glass, tilework, textiles, gold jewelry, medieval Qur’ans, illustrated manuscripts from Iran (left), painted miniatures from India, art made for the Ottoman court.  An extra fillip: Artisans from Fez have created a patio modeled on a late medieval Moroccan design, complete with a fountain.
Maurizio Cattelan:  All, Guggenheim, opening November 4 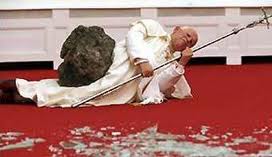 Italy’s favorite smarty-pants gets a mid-career retrospective.  Cattelan is probably best-known here for his effigy of Pope John Paul II being felled by a meteor and for his popularity among the vulgar rich -- his bust of Stephanie Seymour cradling her breasts, generally considered pretty mediocre, sold at auction last fall for $2.4 million.  Will seeing 130 of his works explain his appeal or show him up as just annoying?  New Yorkers will have a chance to evaluate the hullabaloo for themselves.
Sherrie Levine: Mayhem, Whitney Museum of American Art, opening November 10 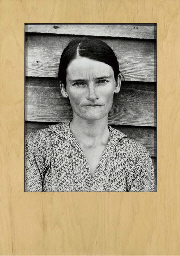 The Whitney’s show offers an opportunity to reexamine one of the original appropriation artists – in 1981 Levine exhibited photographs she had taken of Walker Evans photographs – at a time when artists, photographers, lawyers, and commentators are hypersensitive to the word “copyright.”  Her Evans photos, to which she holds the copyright, are among the works included.