A Metropolitan Museum reject, which was estimated to sell at Sotheby's for between $20,000 and $30,000, was auctioned off today for $626,500 (including premium).  Sotheby's listed it as by a follower of Rubens, but given how much the portrait sold for, it appears that some bidders may have thought otherwise.

In the first half of the 20th century, the painting was considered a Rubens, but scholars in the second half, including heavyweight Julius Held, disagreed.   The Met's own Walter Liedtke, curator of Dutch and Flemish art, thought the painting a copy of a work by Rubens.  It's been suggested that the subject is Rubens' daughter.

The portrait was one of sixteen paintings the Met consigned to Sotheby's to raise money for its acquisitions fund.

The top dog at Christie's Old Masters sale didn't find a buyer today, when a portrait offered as a Bronzino failed to reach its low estimate of $12 million.  The high, unsuccessful bid was half-a-million below that.

Also left out in the cold was a Madonna and Child offered as an early Botticelli (not the so-called Rockefeller Madonna by Botticelli, which sold for a record $10.4 million).  This murky painting had been estimated to go for between $3 million and $5 million, but the high bid, $2.7 million, fell short.

The auction house had hailed both paintings as "rediscovered," their new attributions vouched for by prominent art historians.  (See my earlier post previewing the sale, here.) ﻿﻿﻿

The true star of the show, though, may well be a portrait by Scipione Pulzone ("Il Gaetano"), one of the most sought-after portrait artists in 16th-century Rome -- clients included popes and secular rulers.  The portrait of Jacopo Boncompagni went for more than twice its high estimate of $2.5 million, finding a new home at $6.7 million (without premium).

The Fra Bartolommeo, Caracci, and Pulzone prices were auction records for the artists.

The Metropolitan Museum is cleaning house again, this time deaccessioning sixteen Old Master paintings.  Truth be told, some of them you wouldn't want to hang in your own house, and most you wouldn't expect to see at a magnificent institution like the Met.

But there are a few I wish the museum would retain, especially the devotional triptych of Christ before Pilate by Pedro Sanchez I, a Seville artist active in the second half of the 15th century.  That it's survived intact is remarkable enough, but it also appears to be in excellent condition. 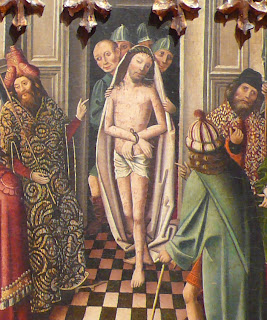 More important, it's an arresting image by an artist of great talent and compositional flair.  Look at Christ covered in blood from being tortured, wrapped in shroud-like drapery, and framed by individualized heads -- to say nothing of the rapidly receding floor.

I challenge anyone to name a single painting in the Met's European paintings galleries by a Spanish artist before El Greco.  Here's a prime example -- it doesn't fit the old-fashioned canon of "progress" in art as exemplified by the Italian Renaissance and Early Netherlandish painting, but it's marvelous.

Christie's Old Masters Sale Preview: Estimates in the Millions of Dollars for "Rediscoveries" on Public View for the First Time

Christie's has a stupefyingly beautiful show of Old Masters on view now to be auctioned later this week.

Some of the highest estimates are for paintings previously ascribed to other names, or reappearing after decades in obscurity.  Such "rediscoveries" often raise questions about attribution -- which, after all, is largely a matter of scholarly consensus reached over time -- and the auction house has rolled out some big names to argue the new attributions.  Some of these big-ticket items are on public view for the first time.

Here are some examples: 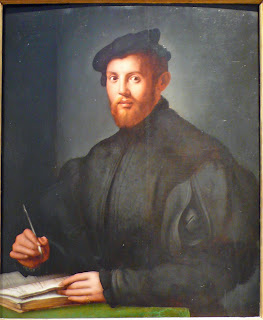 Bronzino, Portrait of a Young Man, ca. 1525 (estimate: $12-$18 million).  This painting, with the highest estimate in the sale, spent decades in oblivion as a work by Bronzino's teacher, Jacopo Pontormo, and was even considered by some a copy of a Pontormo.  It's now making its debut as an early work by Bronzino, court artist to the Medici in Florence and one of the most admired of all portraitists.

The new attribution and the bulk of the Christie's catalogue entry are courtesy of Carlo Falciani, who organized the 2011 glorious, first retrospective of Bronzino's paintings.  Falciani said he saw it when he was working on the exhibition, which begs the question -- why didn't he include it in the retrospective? 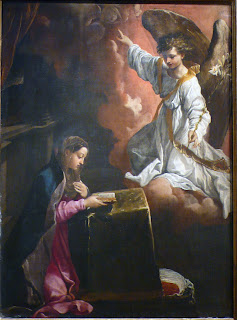 Annibale Caracci, Annunciation, 1580s (estimate:  $1.5-$2.5 million).  A work of sensuous color, the Annunciation was "previously known only from a decades-old black and white photograph," according to the catalogue.  It had been given to Annibale's older, less adventurous cousin, Ludovico, an attribution some still accept.  The Met's Keith Christensen and Andrea Bayer support the attribution to Annibale, who's credited with turning Italian painting toward realism after decades of Mannerism.

Fra Bartolommeo, Madonna and Child (top), mid-1490s (estimate: $12-$18 million). The catalogue lists no exhibitions for this painting, which was unknown until it was published in 1992. It shows a tender moment when the Christ child is climbing up to receive a kiss from his mother, their faces framed against a luminous sky. 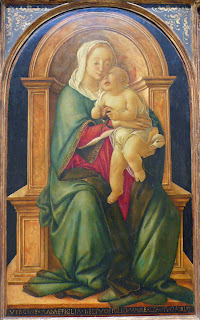 Botticelli, Madonna and Child with Pomegranate, 1460s (estimate $3-$5 million).  Formerly given to Filippo Lippi, the Florentine painter in whose workshop Botticelli trained, this "rediscovery" is now called an early Botticelli by Everett Fahy, former Met chair of European paintings and now a Christie's consultant, who wrote the catalogue entry.  The surface of the painting is so dull that it's hard to make heads or tails of it. 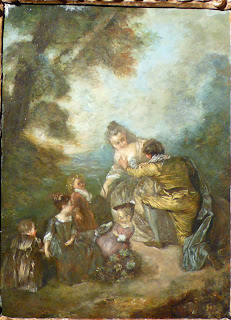 Watteau. The Declaration, ca. 1718 (estimate: $500,000-$700,000).  This tiny oil on copper -- in which a man seems to be copping a feel, was, according to the catalogue, "unknown to recent scholars and missing from the modern scholarly literature on the artist."  It's delightful, and will appear in the catalogue raisonne of Watteau's paintings currently in preparation.

Here are a few other standouts:

In Major Victory for Chabad, Court Orders Sanctions Against Russia of $50,000 a Day; Ruling Is Contrary to U.S. Position

In a major victory for Chabad, the D.C. District Court has found Russia in contempt and ordered it to pay $50,000 a day until it obeys the court's July 2010 order to turn over to Chabad two collections of books and manuscripts.  The court issued the sanctions order yesterday.

The District Court rejected the Justice Department's argument that sanctioning Russia would interfere with the executive branch's conduct of foreign relations.

The U.S. had argued that sanctions would purport to dispose of property held by another state in that state's territory, which would be contrary to international law.  The court responded:  "The United States has conflated a court's issuing of contempt sanctions with execution or enforcement of an award by, for instance, attaching tangible property."

The court also criticized the government's argument that sanctions would undermine the State Department's attempts to resolve Chabad's dispute with Russia diplomatically -- it had engaged in such efforts going back to 1991.  "Though the United States may indeed be 'committed to continuing these efforts,' it provides neither any information regarding its future plans, nor any other reason to believe that its new efforts will be more likely to succeed than past failures."

The Chabad case triggered Russia's embargo on lending art to U.S. museums, now well into its third year, and in its court papers the U.S. said sanctions would interfere with its efforts to end the embargo.  The court was not convinced:  "The United States fails to reasonably and specifically explain the connection between the proposed sanctions and its ability to negotiate a resolution to the moratorium."

Most experts contacted prior to yesterday's decision expected Chabad to lose.

The ruling comes at a time of deteriorating relations between Russia and the U.S., with the latest example being Russia's banning adoptions by Americans.

Unheralded Display of Ingres Portrait Drawings on View at the Met

Every so often, the Met puts on a mini-show of drawings, usually unannounced and unheralded, that is itself worth repeat visits.  Such is the case with its display of half-a-dozen gorgeous portrait drawings by Ingres that were recently given to the museum by longtime patron Mrs. Charles Wrightsman.

Ingres' portraits are the works he's most admired for today, and his portrait drawings are a genre unto themselves.  Typically, the face he renders in great detail, with the rest of the body and the costume barely hinted at.  It's a marvelous technique for drawing the viewer in to what's most expressive of personality.

The Wrightsman drawings are beautiful examples of this portrait style.  But one, just as rewarding, takes a different approach, with as great attention given to the accoutrements of status as to the face.  Ingres' portrait of General Louis Etienne Dulong de Rosnay shows the details of his boots, hat, and broken arm, along with an intense depiction of the fingers of his left hand laced around the hilt of his sword.

The drawings are in the Robert Wood Johnson hallway gallery and will be up through February 24.

Richard Serra, the Met, and Collectors Eli and Edythe Broad

Under the federal Visual Artists Rights Act, artists can disclaim their work if it has been damaged.  Does that "moral right" conflict with art history?

Consider the case of Richard Serra in my article in The Art Newspaper, which discusses a work owned by Los Angeles collectors Eli and Edythe Broad that was displayed by the Met.