At the retrospective of Richard Serra's drawings, which opens at the Met tomorrow and is the first to cover 40 years of his work, you won't always be seeing the originals, though that's not clear from the display cards.

Also, some works face having portions chopped off when they go on tour.

Perhaps the most interesting surprise is that Serra, with the Met's acquiescence, has recreated for this show some drawings that he made more than 30 years ago.  The show is arranged chronologically, and the recreations, made in 2011, are shown with works from the 70s, when Serra made the originals. 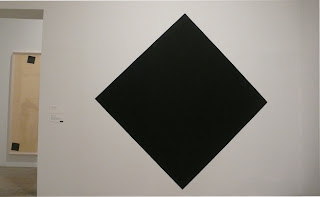 Why the recreations anyway?  A Met curatorial staffer told this reporter that the first "iteration" of some drawings couldn't be loaned, or no longer existed, or were too damaged to be exhibited.

The damage, he said, was caused by stapling the original works to the walls -- that's how they were meant to be displayed and how the recreations are displayed at the Met -- and the stapling simply put too much stress on what are basically pieces of linen covered with a mass of paintstick.

The recreations seem brawny ("Diamond," above, is one of them), and the original works may have as well -- I asked the staffer if Serra anticipated the damage and he said, "Probably not."

No one is exactly running a hoax here, but no one is exactly explaining it to the person standing in front of the art either.  You'll know which works are recreations only if you read the labels and then catch on that there are two dates, one reading 2011.  In addition, two works (including "Blank," below) are labeled "exhibition copy." 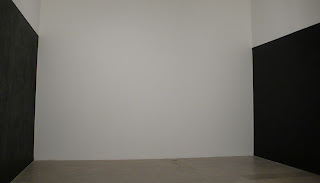 And you can jettison the notion that all Serra drawings are treasured objects.  Some were created as site-specific works, says Serra, and their dimensions are variable, depending on the dimensions of each site. 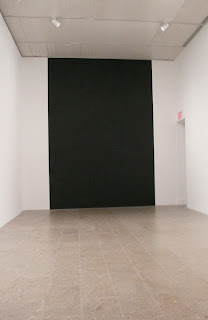 So "Taraval Beach" (right), which runs floor-to-ceiling and, by the way, already bears two dates, will most likely be trimmed when the show travels.  The Met's ceilings are nearly 20 feet high and are higher than the future stops on this show's tour -- the Menil Collection and SFMOMA.  Art by the yard, cut and chop?

I asked Serra himself on Monday about the integrity of altering his original drawing by cutting it.  He just shrugged, stating, "It's (only) material."

These drawings, he said, are more about the work "as perception than as something precious," adding that he'd be "happy" as long as one version exists.

This attitude is so provocative -- is Serra more radical than we thought? -- why not bring it out in the open?