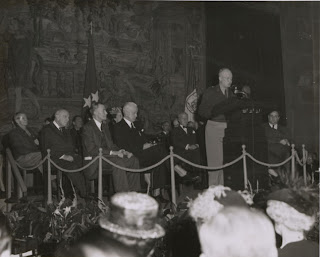 A recording of a speech by soon-to-be U.S. President but then-General Dwight Eisenhower a year after World War II ended, addressing the conflict between soldiers' lives and saving cultural monuments, has been found in the Metropolitan Museum's archives.

In a unique commentary by perhaps the most famous general of the 20th century, Eisenhower's remarks on preserving life versus preserving European art would have confounded some New Yorkers -- according to several historians, you couldn't walk down a street in the city without finding a grieving family.  There were more than a million American casualties in that war, with more than 400,000 soldiers dying.

In his speech Eisenhower stated that soldiers' attempts to preserve monuments sometimes went "beyond" the limits of "military prudence." His words still resonate today, when the U.S. is involved in military actions in the art-rich Middle East.

The discovery of the recording (the Met had published the speech shortly after it was given) was announced Friday by the Monuments Men Foundation, whose director, Robert Edsel, found it while doing research at the museum. 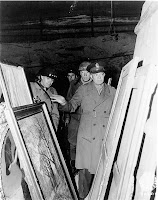 Eisenhower made his comments when the Met presented him with a lifetime fellowship in recognition of his efforts to preserve cultural monuments during World War II.

Eisenhower, in December 1943, had ordered that cultural monuments in Italy were to be respected "so far as war allows."  In May 1944, just before the invasion of France, he warned that "it is the responsibility of every commander to protect and respect these symbols whenever possible."  After the German surrender in May 1945 he directed that repositories be set up to process artworks and other objects recovered in Germany and Austria.

Much of Eisenhower's speech is taken up with the platitudes one would expect -- soldiers being exposed to different cultures, for example, and a return to cultural values in peacetime  -- but it is notable for a couple of exceptionally provocative statements.

What must his audience have been thinking when he spoke of the soldier and the artist as opposites?

He referred to himself as a "representative of the science of destruction" and stated that the soldier's "necessary association with lethal weapons would seem to imply the existence of an unbridgeable gulf between his philosophy and that of the artist.

"Perhaps this is so."  And again: "War is essentially destruction . . . and in this process much of the world's heritage in art has been inevitably damaged or lost."

Consider, then, Eisenhower's statement that soldiers "tried, within -- and sometimes beyond -- the limits of military prudence, to protect and preserve these products of man's creative instinct."

With the phrase "and sometimes beyond" the limits of military prudence, was he implying that preserving art sometimes took precedence over preserving American lives? 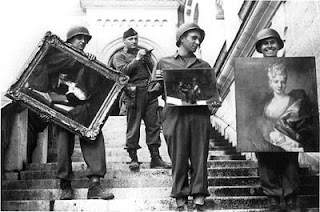 Eisenhower also paid tribute to the Army group now known as the "Monuments Men," a handpicked selection of men and women among the elite of museum directors, curators, and academics who tracked, preserved, and repatriated millions of artistic and cultural items stolen by the Nazis.

An adviser to this group, who also lobbied for its formation, was then-Met director Francis Henry Taylor, who spoke at the award ceremony (in the top photo he is at the far right).  James Rorimer, who succeeded Taylor in 1955, was one of the first Monuments Men and was instrumental in the recovery of art treasures.

Ironically, after the war, Taylor supported a proposal to take -- as spoils of war -- a couple hundred German-owned artworks and give them to the National Gallery in Washington, claiming, "The American people had earned the right in this war to such compensation if they chose to take it."

Twenty-five of the Monuments Men signed a "Wiesbaden Manifesto" objecting to this reverse looting, warning that "no historical grievance will rankle so long, or be the cause of so much justified bitterness, as the removal, for any reason, of a part of the heritage of any nation."

The works were taken anyway, ostensibly for their preservation, and exhibited at the National Gallery to record crowds -- nearly 1 million people in 40 days.  They were later shipped back to West Germany.  Some works were not reunited with their museums in East Germany until Germany's own reunification in 1990.

Eisenhower's speech can be heard here.  A transcript can be read here.