The Whitney's "Lyonel Feininger: At the Edge of the World": A Reputation in Free-Fall 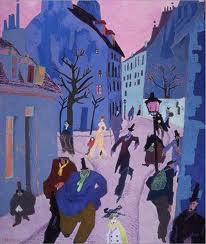 Lyonel Feininger (1871-1956) is not exactly a schlockmeister -- though some of his paintings do look like cheap hotel art – but the retrospective that opened last week at the Whitney might just send his reputation into free-fall.
This retrospective is the first in New York since 1944 and the first in the U.S. since the 60s, so it offers an opportunity to take stock of Feininger, an American who lived for 50 years in Germany, for the first time in a couple of generations.
He proves to be an artist without consequence. 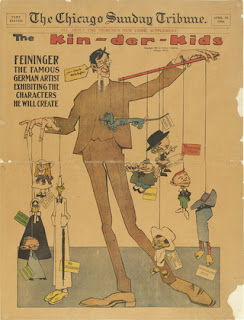 Feininger was affiliated with avant-garde German Expressionists but inhabited his own small world of amusing illustration.  He adopted a type of Cubism but stripped it of its ambiguities.   He taught at the progressive Bauhaus with artist-rebels like Kandinsky and Klee, while his own paintings became formulaic.
Which isn’t to say that there aren’t some works to be seen here that give real pleasure. 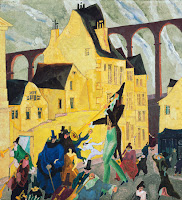 Sometimes his art has a delightful whimsicality.  Brought by his musician parents to Germany when he was 16, Feininger became a successful illustrator and cartoonist -- he even did comic strips from Germany for the Chicago Sunday Tribune (above, of 1906) – before turning to painting in 1907.
For a few years his oil paintings retain the lightheartedness and exaggeration of caricature – small heads and clownish shoes, rubbery bodies and fanciful streets – and they’re prettied up with bright colors (top, "Street Near Paris," 1909, and above,"Carnival in Arcueil," 1911).  The Whitney, perhaps recognizing that Feininger’s early works are the ones with audience appeal, has given over nearly a third of the exhibit to them.   But artistically significant?  They’re essentially illustrations of unwritten fairy tales.

Choo-choo trains and bobbing boats appear early and later too, in small works on paper.  Among the most charming works in this show are the wooden toy trains and buildings he began making commercially in 1913 – an endeavor cut short by the outbreak of war -- and then continued making on his own.
In the 1910s, Feininger encountered Cubism and began painting the works he is best known for – German architecture and seascapes.  With translucent planes, the light-filled spaces and sky take on some of the solidity of architecture itself, depicted as though seen through a prism ("Pier," 1912, below). 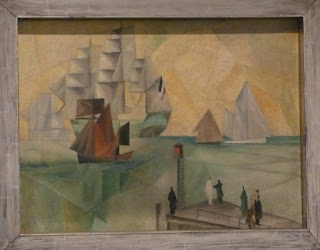 For 40 years he painted these same subjects in this same style.  The earliest of these works, from around 1912 to 1915, have the excitement of discovery, but they quickly decline to emotional emptiness and pictorial boredom.
With a few exceptions – some street scenes, for example -- Feininger has little to say about modern life, either in subject and emotion or by stylistic metaphor.  In essence he’s a traditionalist.
His early works might use the bright colors of German Expressionism – he exhibited with the avant-garde Die Brucke – but with nothing of their furious experimentation or their exploration of the dark recesses of the psyche. Feininger complacently inhabits the 19th century of the Brothers Grimm, complete with old-fashioned costumes. 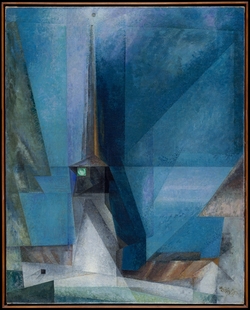 His Cubist-inspired works likewise shun the contemporary – no everyday objects like newspaper and pipe for him. He looks back nostalgically to medieval architecture and the Romantic era's boat at sea.  It’s the old-fashioned Germanic striving toward spirituality but with the emotional punch sucked out ("Galmeroda VIII," above).
His detachment from the trauma of World War I and its aftermath in Germany is creepy, especially when compared with the war-wounded drawn by George Grosz, the decadence of contemporary life depicted by Christian Schad, and the dark circuses of Max Beckmann.
Feininger continued using cheery colors, and when he attempted serious war themes, he failed.  (He supported Germany against the allies, by the way.)  His picture of an abandoned child with soldiers is flat poster-style decorative.  The prostitute “Woman with Green Eyes” is a knockoff of fellow Die Brucke artist Alexei Jawlensky.

One might think that Feininger’s affiliation with the Bauhaus, which lasted into the 1930s, would open a new chapter.  In 1919 founder and architect Walter Gropius commissioned him to design the cover of the Bauhaus manifesto.  Feininger supplied a woodcut  -- of a medieval cathedral (left).
And although there are a few paintings in the 1920s and 30s that seem to move toward abstraction and a new compositional rigor, what the Whitney displays is mostly the same old architecture and seascapes, but now in hotel room and greeting card territory like "Mouth of the Rega," below. 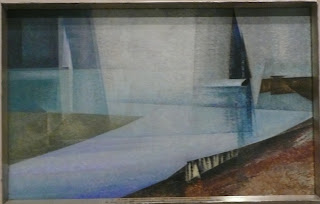 Feininger returned to America in 1937, the same year his work was declared degenerate by the Nazis.  Then it’s more seascapes and cityscapes, but of Manhattan now.  They’re darker, and many are night scenes (below).  They’d make good New Yorker covers. 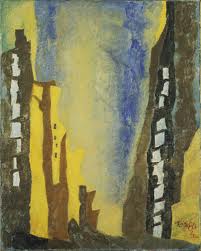