The Supreme Court had requested the views of the Department of Justice through the Solicitor General, who recommended that the Court not hear the cases and instead let the lower court decisions stand -- a recommendation the Court agreed with.
Who Owns the Art?

So what does it mean?

In Von Saher, the plaintiff -- the sole heir of Dutch art dealer Jacques Goudstikker, who fled the Netherlands in 1940 -- is seeking two Lucas Cranach paintings (Adam and Eve, shown below hanging in the museum) seized by Reichsmarshall Hermann Goring.  They now hang in the Norton Simon in Pasadena and, with today's Supreme Court action, are likely to remain there. 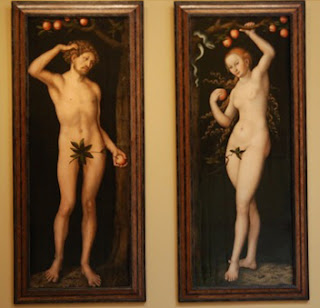 The briefs submitted to the Supreme Court in Von Saher make one thing clear:  Holocaust restitution cases can be a lot more complicated than good versus evil, contrary to what their generally superficial treatment in the press would have you believe.  For example, it's not clear that Goustrikker was even the lawful owner of the Cranachs -- at any rate, they had been returned by the Dutch government to another claimant in 1961.

The plaintiff in Cassirer* -- whose grandmother was forced to give up the painting in 1939, when she fled Germany -- is seeking a Pissarro in the Thyssen-Bornemisza museum in Madrid (below).  Cassirer sued not just the museum but Spain as well, which owns the museum.  After today, Cassirer can continue pursuing the Pissarro.

The briefs here indicate the U.S. government's continuing interest in smoothing things over with Spain.  The State Department's interest in resolving the case diplomatically came out awhile ago in a document published by Wikileaks.  Now the Justice Department has apparently extracted a promise from Cassirer to agree to Spain's dismissal from the case.

Von Saher v. Norton Simon
The issue in Von Saher was whether the California statute the plaintiff sued under was preempted by federal law.  The statute, enacted in 2002, created a distinct cause of action, a sort of Holocaust recovery act, that extended the statute of limitations to recover Nazi-confiscated artwork from museums.
The Norton Simon moved to dismiss on the ground that in enacting the statute California was trying to redress wrongs that occurred during World War II, which intruded on power reserved to the federal government.  The Ninth Circuit Court of Appeals agreed: “the power to legislate restitution and reparation claims is one that has been exclusively reserved to the national government by the Constitution.”
As of today, that decision stands, but the plaintiff’s case hasn’t been thrown out of court entirely, at least not yet.  The Ninth Circuit held that her claim might be timely under state common law to recover personal property, so she’ll have an opportunity to litigate whether she brought suit within three years after she “discovered or reasonably could have discovered her claim to the Cranachs.” 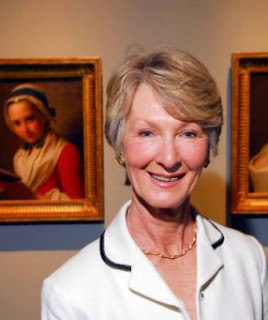 That might be an uphill battle.  Van Saher (left, shown with other restituted art) claimed she only discovered the works in 2000, but they've been hanging in the Norton Simon since the 1970s.  Neither the museum nor the works are exactly obscure.
The Norton Simon has gotten a lot of flak for not just handing the paintings over, so it bears noting that some thorny factual issues remain to be sorted out – such as, fundamentally, was Goudstikker the lawful owner?
The Cranachs and other Goudstikker paintings were recovered by the U.S. armed forces, and in 1946, pursuant to a policy of external restitution, they were returned to the Netherlands as the country of origin in the expectation that the Netherlands would return them to the lawful owner.
As stated in the Solicitor General’s brief, the Netherlands returned the Cranachs to another claimant:
“In 1961, George Stroganoff-Scherbatoff, heir to the Stroganoff family, instituted a restitution proceeding in the Netherlands for the Cranachs and other paintings.  Stroganoff asserted that the paintings had been seized from his family by the Soviet Union and unlawfully auctioned to Goudstikker. In July 1966, the Dutch government transferred the Cranachs and another painting to Stroganoff in settlement of his claim and in exchange for a monetary payment.  Around 1971, Stroganoff sold the Cranachs to the Norton Simon Art Foundation.”
Plaintiff, for her part, asserts that the Cranachs were never part of the Stroganoff family collection and that Goudstikker bought them at auction legally.

Something else to consider -- isn't the judgment of the Dutch government entitled to substantial deference as a matter of international relations?
Cassirer v. Kingdom of Spain
The Cassirer case questioned what kind of claims can be brought under the federal Foreign Sovereign Immunities Act, which makes foreign governments immune from suit unless the claim comes within a statutory exception to that act.
Cassirer asserted that his claim came within the “expropriation exception.” That exception permits the court to hear a case where “rights in property taken in violation of international law are in issue.” 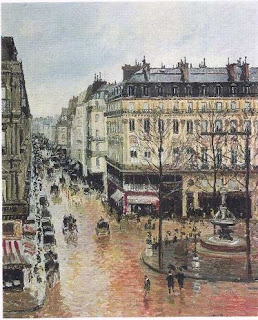 Defendants agreed that the Pissarro was taken by the Nazis in violation of international law and therefore “rights in property taken in violation of international law were in issue.”
But they argued that the claim did not come within the expropriation exception for two reasons.  First, they argued that the FSIA permits jurisdiction only over a foreign state that itself has taken the property in violation of international law, but neither Spain nor the museum had done so. Second, they argued that before bringing suit under the FSIA, Cassirer had to exhaust his judicial remedies in Germany or Spain.
Analyzing the plain language of the statute, the Ninth Circuit Court of Appeals disagreed.
Cassirer can now proceed with his case – maybe. The Ninth Circuit indicated that the district court should consider whether, as a matter of comity between nations, it should require the plaintiff to exhaust his remedies overseas anyway, even though that is not required by the statute.
And if the case does proceed, it may be without Spain as a defendant.  The Solicitor General informed the Supreme Court in its brief that Cassirer’s counsel “has informed this office” that Cassirer would not oppose a motion to dismiss Spain from the suit.  “The fact that Spain may not ultimately be subject to the District Court’s jurisdiction -- and in any event that other foreign states should not be subject to the jurisdiction of United States courts based on the possession of expropriated property by their agencies and instrumentalities – significantly diminishes the potential impact on foreign relations of the decision below.”
*The plaintiff died during the litigation and his estate has been substituted as plaintiff, but for simplicity I refer to Cassirer rather than his estate.