One-half of one cheer for the Met for realizing that it’s egregiously wrong to dishonestly describe what’s hanging on its walls.

An earlier post discussed two deliberate fakes in the Met’s “Thinking Outside the Box” exhibit. 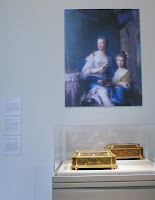 One was identified as an “oil on canvas” painting by Jean Marc Nattier (left) -- in which a girl holds a box -- and the other as an “engraving.”  But they’re fakes.  Loosely speaking, they’re photo reproductions.

On Monday, a Met spokeswoman stated that the labels would be changed.  A policy of honesty is better late than never.  Now the new labels are up, and each states, in parentheses and in type no larger than the descriptions of the missing originals, that each of the works is a reproduction (below, click to enlarge).

The original works, which are owned by the Met, were part of the exhibit when it opened, the Met says.  The painting was shipped off to the Getty for a show that opened there in April — even though, it should be noted, it was prominently featured, and still is, in the introductory wall text to the Met’s own show. 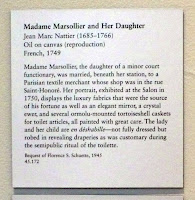 The engraving was taken down to minimize its exposure to light, the Met explained, and that is a longstanding policy I know about designed to protect certain artworks – though the removed works are typically replaced by other, substitute, originals.

So far, so good.  At least there are reasons these specific originals are no longer on display, though dispatching the painting flies in the face of common sense, since it was apparently thought to be an organizing work in the original exhibition.

So why weren’t both replaced with other originals from the Met’s collection?

On a few days when we both were there, a colleague who is an investigative reporter with decades of experience talked to some visitors who had stopped to look at the “Nattier.”  They told him they thought it was a painting, and while we were there, several visitors photographed the reproduction in the mistaken belief that it was the real thing. 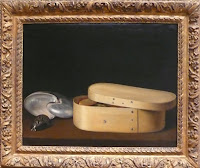 With the fake engraving, it’s probably even more difficult for the casual visitor to distinguish the reproduction.

Why the museum is deliberately showing fakes in its galleries – this show is not the only one now running with misrepresented reproductions or undisclosed recreations, a historic change in policy — is a question the Met refuses to answer.

The “goal” of displaying the reproductions in “Thinking Outside the Box,” Met vice president Elyse Topalian told me, was to give these works a “presence” in the show.  Huh?

She would neither explain her comment nor further discuss its implications for the institution’s integrity or exhibition policy.  But carried to its logical conclusion, this type of thinking means there’s no need to persuade Russia to resume lending art to U.S. museums – it’s quite alright if works from the Hermitage have a “presence” here through reproductions. 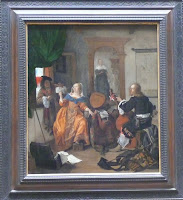 For hypothetical consideration, shown here are a few paintings depicting boxes currently hanging in the permanent collection --  Sebastian Stoskopff's  "Still Life" (above), Gabriel Metsu's "Musical Party" (left; note the trunk at the bottom left corner), and Gaspare Traversi's "Teasing a Sleeping Girl" (bottom).  And with more than 1.5 million prints and drawings in the Met’s collection, the engraving now present as a reproduction can’t be the only appropriate work on paper for this show.

As for the slight changes the Met did make, the new labels don’t disclose that the “reproduction” of the painting is smaller than the actual work or that the proportions of the actual print are different from what’s reproduced.

One might wish the Nattier label didn’t still describe the textures represented – “luxury fabrics,” “crystal ewer,” “ormolu-mounted tortoiseshell caskets” – as “all painted with great care” when there’s no paint to look at.

It’s a new era at the Met, it would seem. 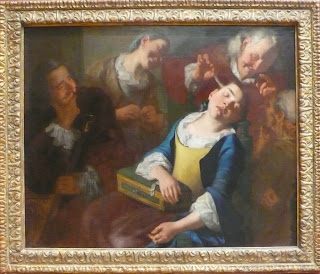 Text and photos copyright 2011 Laura Gilbert
Posted by laura at 11:10 AM