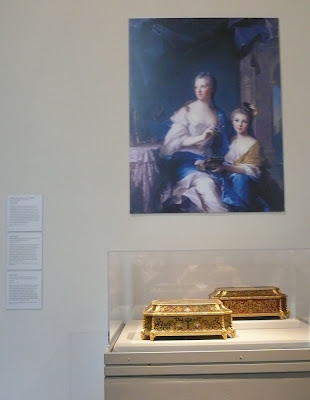 It takes grapefruits the size of Bernie Madoff to try to pull off a hoax of this magnitude, but the Metropolitan Museum, as it has previously, is again deceiving the public.

As part of a special exhibition, it's presenting at least two pieces of flimflammery.

One, crammed in with two decorated boxes in a wall/table display, is identified as "Madame Marsollier and Her Daughter" by the 18th-century French artist Jean Marc Nattier (top).  It's labeled "oil on canvas" with the date 1749 (below left, click to enlarge). 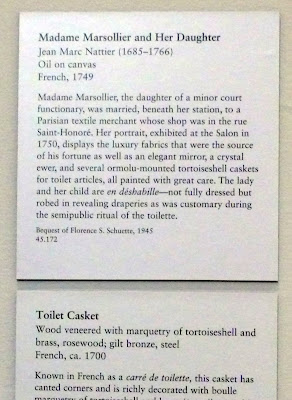 The other, on the wall opposite, is identified as "Costume of a Luggage Maker" after Nicholas de Larmessin, a French printmaker who did a series depicting costumes of various professions.  It's labeled "engraving" with the date c. 1690 (below right, click to enlarge).

But certainly the garbage the Met has on view is neither oil painting nor engraving.

Instead, they are photographic reproductions.  The reproduction of the Nattier is mounted on what appears to be foam core, a lightweight plastic backing.  (Note, at the bottom of this post, the torn lower left corner of the foam core, whose date I would guess is 2010 or 2011.)

The purported engraving appears to be some sort of cardboard no thicker than the label. 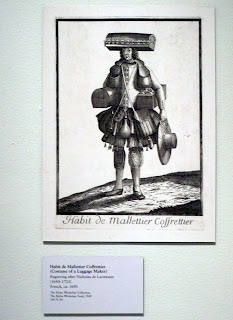 The Met, by the way, owns the originals of both.

This isn't the first time the Met has been caught putting one over on its visitors this year.  Some of the Richard Serra drawings it's currently showing are not the originals but are instead recreations, a fact nowhere disclosed in the exhibition itself.

And about the Jeff Koon-loaned Christ that the label says is a painting by Quinten Massys, is it really a workshop production?  The Met refused to respond to repeated inquiries, but it has never denied it either.

The trickery here didn't require any ferreting out.  It's as plain as the nose on Met director Thomas Campbell's face.  Is this the kind of hubris that led the Getty to forge signatures, tax appraisals, and provenances in its decades-long antiquities scandal, as recently reported in the book "Chasing Aphrodite"?

Fitting, isn't it, that the Nattier oil on canvas is now a highlight of the "Paris: Life and Luxury" show -- at the Getty.  But where's the original engraving?

The name of the exhibition that includes the photographic reproduction is "Thinking Outside the Box."  Indeed.

Campbell's office refused to comment and referred all questions to the Met vice president of communications.  She hasn't called back in days.

June 13 Update:  Today, seven days after my initial inquiry, Met vice president for communications Elyse Topalian informed me that the two reproductions discussed here will "certainly be getting new labels" and that the new labels are now "on order." 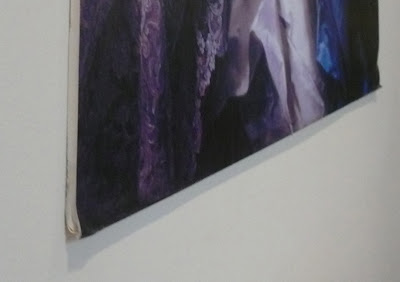 Text and photos copyright 2011 Laura Gilbert
Posted by laura at 10:00 AM