How do you inform a collector that a work he bought from you for, oh, a million dollars or so is an illicit work, illegally created and now unsaleable?  Well, if you’re the gallery that sold it, you yell for your lawyers.

That’s what Larry Gagosian and his gallery did when they sent letters to the buyers of appropriation artist Richard Prince’s “Canal Zone” paintings, which, the U.S. District Court in Manhattan ruled in March, infringed -- some might say “stole” -- Patrick Cariou’s copyrighted photographs and are therefore not so different from contraband. 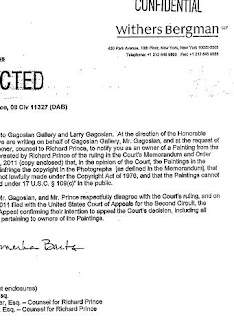 The letters (left) were sent to comply with the Court’s order in that case, but they didn’t exactly tell the collectors they had all but thrown their money away (unless the ruling is overturned on appeal, which could take years).

The letters stated that “in the opinion of the Court” – as though the federal courts are art critics instead of constitutionally delegated authority on the law of the land –  the paintings were “not lawfully made under the Copyright Act of 1976” and they “cannot lawfully be displayed . . .in the public.”

Translation: the paintings are like pirates’ booty, have to be hidden from public view, and, even according to Prince’s own lawyer, most probably can’t be resold.  According to the defendants’ documents, at a minimum 14 works were sold, and four sold for prices ranging from $400,000 to $2.43 million.

As for Prince himself, the Court’s smackdown doesn’t seem to have changed much, though it could cost him a big hunk of money.  As far as his lawyer Josh Schiller of Boies Schiller knows, the decision hasn’t changed his practice of using other people’s images, nor has it caused “any of his works to be pulled” from any shows, the attorney told this reporter.

Indeed, Prince had two well-received exhibitions in Paris this spring and another in Hongkong.  In August, he’ll be showing in the Hamptons.

For the “Canal Zone” buyers, though, it’s a different story.  Their paintings can’t be sold, except conceivably on the black market.  Schiller said “any kind of sale would include showing (the work) publicly” and that’s been forbidden by the Court.

Schiller didn’t say the “Canal Zone” paintings were now worthless – he described their worth as “undetermined” – but he did say that the decision had placed an “implied limit on their value.”  He termed the decision’s effect on the collectors “an injustice.”

A lawyer close to the Gagosian organization said that if the collectors were his clients, he would advise them not to put the paintings up for sale.

Copyright law expert David Wolf, who is not involved in the case and is former litigation counsel at Time Inc., said that any third party who knew about the Court decision and tried to sell the work – not just the owners but an auction house, for example -- “would run a pretty severe risk.”

Have any collectors asked for their money back?  Schiller said he didn’t know.

So are Prince’s dealer and co-defendants Larry Gagosians and his Gagosian gallery offering buyers refunds?  When asked, the gallery refused to comment.

That’s not all the collectors have to worry about, as revealed to this reporter by the parties’ lawyers this week and gleaned from Cariou’s recent motion to dismiss a joint appeal to a higher court by Prince, Gagosian, and the gallery.

The people who shelled out the big bucks -- as recited in the Court’s decision, eight of the works sold for a total of $10.48 million, and seven were exchanged for art with an estimated value between $6 million and $8 million -- now also could be exposed to the disclosure of how much each paid and, perhaps, their names.

Private market sales are usually kept secret – the industry-wide practice is an old carny shell game of keeping everyone in the dark about an artist’s true prices -- and Gagosian has a strict policy of don’t tell.

But, in what could be some of the most remarkable revelations of art-market dealings in recent history, that could change when a public jury trial is held to determine the damages that photographer Cariou suffered.

Cariou’s lawyer Dan Brooks has been provided with the appropriate receipts for each painting sold, and the parties have stipulated that the prices “shall be admissible in evidence.”  For now, the information is subject to a confidentiality agreement, but Brooks said they would be “fully aired” at the damages trial and “there won’t be any dispute” about the prices the works brought.  At trial, the buyers’ names could also be revealed, said Brooks.

If we get to that trial.

Prince and the Gagosian defendants filed a notice of appeal before the damages trial could get started, and the District Court adjourned the trial pending the outcome of the appeal. So Cariou has moved to dismiss the appeal, arguing that it is improper until damages have been resolved – that’s a motion that will be decided who knows when, though it could be as early as August.

Meantime, of course, settlement is always a possibility, though it was also a possibility that was ignored before the District Court dropped a ton of bricks on Prince’s and Gagosian’s heads.
If the appeal is permitted before the damages trial, Schiller plans to argue among other things that the District Court in effect should have rejected or at least discounted his own client’s testimony – since Prince proved to be his own worst enemy.  The Court “would have benefited,” said Schiller, from considering “more objective factors,” which Schiller didn’t specify, and evidence of “how the public perceives his work.”

Prince, in his losing effort, had argued that his use of Cariou's photographs came within the "fair use" exemption of the copyright law, which allows limited borrowing of other people’s copyrighted work for news reporting, satire, and criticism, for instance.

But the District Court held that for "fair use" to apply, the new work must be "transformative" of the original.  Prince's work was not transformative, the Court found, because it did not "in some way comment on, relate to the historical context of, or critically refer back" to Cariou's work.

Under this test, Prince helped sink his own case.  He testified at deposition that he had no interest at all in what Cariou's photographs meant.

Focusing on Prince’s testimony is too “narrow” a view of the law, said Schiller, and it means “an artist has to lawyer up to get his perception across.”

(Well, one might rejoin, only if an artist is sued, and then he has to lawyer up anyway.)

It could be tough to overcome Prince’s testimony.  “Whatever arguments they make, the Court will look at Prince’s testimony,” said copyright expert Wolf.  “Anytime the party gives detailed testimony about what he’s doing it’s important.”

What Happened to the Unsold Paintings

The District Court had given Carriou the power to determine the fate of the unsold “Canal Zone” paintings.  We now know what he decided.

It turns out that within days of the Court’s decision, defendants’ lawyers, “expressing concern that the infringing paintings might be destroyed” -- an option the Court explicitly permitted – asked Cariou to agree to store the works until the case is somehow resolved, according to papers filed by Cariou’s lawyer Brooks.

Cariou acquiesced, so there’ll be no conflagration, at least for awhile. The unsold paintings are now warehoused somewhere in Long Island City.

Schiller said he thought Prince was a “target” because he was “rich.” But rich also means he may well be able to afford endless, costly litigation – Boies Schiller reportedly racked up $7 million in fees defending the Andy Warhol Foundation in an authenticity lawsuit, with the fellow on the other side finally dropping his suit because he could no longer afford to litigate, he had said.

I asked Brooks if he was concerned that his client would be litigated to death.  Brooks’ response:  “No.”