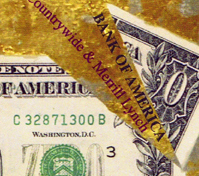 Last week it became all that much clearer how enormous a debt Bank of America owes U.S. taxpayers. Not only was it bailed out with taxpayer money to the tune of $45 billion in 2008 -- we knew that before.  But the newly released documents from the Federal Reserve show that during the worst of the financial crisis and through April 2009 BofA and its then-new acquisition Merrill Lynch took indirect taxpayer subsidies of more than $2 trillion in the form of short-term low-interest loans. It has not yet paid them all back.

At the same time, BofA has been awfully quiet in this country -- nondisclosure apparently as much of its procedure in this area as it is in its mortgage frauds -- about its funding of big, expensive-sounding projects overseas.  As just one example, it's sponsoring an entire museum in Italy.

That's right.  Although BofA didn't issue a press release in the U.S. that I could find, the Italian press has been busy reporting that the bank is the sponsor, with Italian conglomerate Finmeccanica, of the Museo del Novecento in Milan.  It's a new museum for Italian 20th-century art, and it's opening this week.

On March 3, the BofA-funded "Afghanistan:  Crossroads of the Ancient World" is opening at the British Museum.  It will showcase more than 200 objects from the National Museum of Afghanistan, the earliest dating from around 2000 B.C.  It promises to bring in lots of visitors, both because of its dramatic story -- the artifacts had been feared destroyed after the Soviet invasion in 1978 and remained hidden until 2004 -- and because it includes lots of gold (a gold crown is at right).  According to British Museum curator John Simpson, "They are some of the world's most beautiful and priceless objects."

On April 5, "Manet:  The Man Who Invented Modernism," also sponsored by BofA, opens at the Musee d'Orsay in Paris.  It, too, is sure to be thronged.  According to the museum's website (illustrated with the Manet painting below), it is the first exhibit devoted to Manet in France since 1983, i.e. the first in a generation, and it will include a reconstruction of his exhibition "La Vie moderne," organized in March 1880 at the start of Paris's annual Salon.

BofA recently announced -- in a press release issued from London -- its most recent grantees for its overseas art conservation program.  It'll be giving money to institutions in Russia, Lebanon, South Africa, Ireland.  Westminster Abbey will even get some refurbishing before the royal wedding.

BofA's contempt for U.S. taxpayers is stunning.  It's not as though the arts here couldn't use some help.  Some of the finest museums in the country have had to lay off staff because of the financial cataclysm brought on by BofA, Merrill, and its mortgage arm Countrywide:  The Detroit Institute of Arts, the Cincinnati Art Museum, the Indianapolis Museum of Art, the Guggenheim.

The Metropolitan Museum, little more than a stone's throw from BofA's shiny new New York headquarters building, laid off 14 percent of its staff in 2009.  The Fresno Metropolitan Museum in the bank's home state of California died in January.
Posted by laura at 3:11 PM