Nicolas Poussin's "Ordination," one of his celebrated series of "Seven Sacraments," failed to sell tonight at Christie's in London.  It was offered by the Duke of Rutland, whose ancestors had bought it in 1785 from the descendants of its original owner, Cassiano del Pozzo, who had commissioned it from the artist in the 1630s.

This can only be a major disappointment for Christie's.  Way back in September it had announced the sale at an estimated 15 to 20 million pounds ($23.6 to $31.5 million).  It produced a video about the work and took the painting to France on a get-to-know-you tour.  The catalogue entry ran for pages and pages. 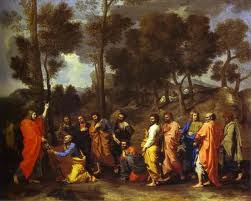 Breathing a sigh of relief must be the National Gallery in London, where the painting had been on loan with four of its seven siblings (one perished in a fire in the 19th century, and the series' "Baptism" was sold in the 1930s to department store magnate Samuel H. Kress, who donated it to Washington's National Gallery).  Had the painting sold, it was almost certain that the government would have imposed a temporary export ban to give the museum time to try to raise funds to buy it.  This would have been extremely difficult given the National Gallery's commitment to raise millions of pounds to keep other works from leaving the country.

Ironically, the "Sacraments" had been under an export ban -- from Rome -- more than two centuries ago.  When Robert Walpole (d. 1745) had tried to buy them, then-Pope Benedict XIV refused to issue an export license.  A dealer finally succeeded in obtaining them for the ancestor of the current owner, but only by having copies of the series painted and then smuggling the originals out.
Posted by laura at 5:31 PM