Can Bank of America Atone Through Art?

Can Bank of America atone through art? 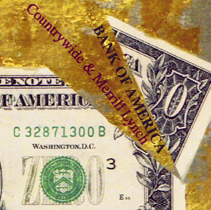 Let's review just some of what BofA needs to atone for:  Taxpayer bailout of $45 billion necessitated in great part by its own nefarious conduct.  Continued, under-the-radar taxpayer subsidies in the form of near interest-free loans from the Fed.  Fraud allegations concerning its acquisition of Merrill Lynch-- settled with the SEC for a $150 million fine but with an investigation and charges still active in New York State.

And then there are the fraudulent mortgage documents it's been submitting to the courts and the $141.6 billion in home-equity loans on the books, which, when their true value becomes known, may require another huge taxpayer bailout.

So what's a bank to do to make things good again with taxpayers, the jobless, and retirees whose savings evaporated?  If you're BofA, you piss away money on arts projects overseas.

In 2008, when it was driving the economy over the cliff, BofA initiated "Art in Our Communities," under which it organizes pre-curated shows from its multimillion-dollar art collection.

Currently on view -- in Paris -- is a photography show at the Mona Bismarck Foundation.  Just closed -- in London -- 60 paintings by the Wyeths at the Dulwich Gallery.  Opening spring 2011-- in Dublin -- an exhibit of Matisse books.

When I visited the Bronzino show -- in Florence -- I noticed several paintings had been restored by something called the "Bank of America Merrill Lynch Art Conservation Programme."  BofA initiated this program in 2010 to fund art conservation in Europe, the Middle East, and Africa.  How many taxpayers do you know who are going to be visiting the Szepmuveszeti Museum in Budapest to see Bronzino's restored "Allegory of Venus, Cupid, and Jealousy" (above right)?

BofA provides funding for the biggest art prize -- in the U.K.  And so on.

Where does the money come from?  Bank of America is insolvent -- it has no money of its own to spend -- so I guess it comes from you and me.