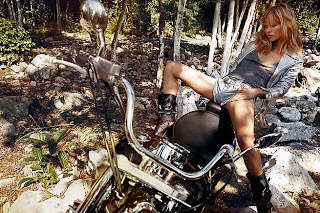 Maybe it was inevitable in this year that saw MoMA's formerly reputable P.S. 1 putting a fashion editor and a style journalist in charge of a performance thingee called "Move!" and a year that saw fashion designer Jeremy Laing curating an art exhibit at the Toronto International Art Fair.

Now, fashion model Kate Moss will be curating herself at the Pulse art fair in Miami.

More specifically, Moss has curated a portfolio of 11 photos of her posed kittenish self -- taken by 11 of her "favorite" shutterbugs -- that will be for sale at Danziger Projects come December 2.  James Danziger takes co-curator credit.

A new wrinkle in the Art Whore Chronicles:  art institutions and galleries will do anything to get into bed with fashion, even put the fashionistas in charge.

Danziger doesn't call this portfolio art.  Instead it invokes art talk to aggrandize photos that look like slick magazine spreads (despite "elements" of fashion, "the photographs are timeless beyond season"; a "snapshot attitude" creates "a modern-day odalesque," and so on).

It won't come as a suprise that the photographers, except for Chuck Close, are those who mainly shoot ad campaigns or take pictures for fashion magazines like Vogue or W. 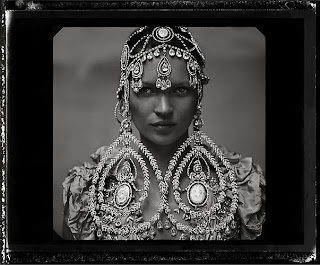 So if you think Annie Leibovitz is worth a lot of money, go ahead.  Otherwise, ask yourself if you'd pay $75,000 for Chuck Close's autograph.

As for Danziger's plea that Moss is "one of the most memorable figures of our time," is that hyperbole, or superannuated camp?  Aside from being nonsense, that is.  Chuck Close had the right idea: he cropped her face out of his photo altogether.