A New Hugo van der Goes at the Met? 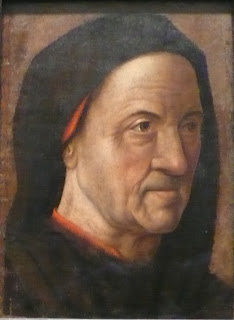 The Met describes it as a work of "extraordinary quality and condition" and "among the finest examples of early Netherlandish portraiture."  For an institution that has portraits by Rogier van de Weyden and Hans Memling -- just for starters -- those are strong words indeed.

The attribution, for now, is "circle of" Hugo van der Goes.

The Met already has two portraits attributed to Hugo himself, one of an older monk (below left) and another of a young man (below right), but these attributions were hard fought.

As for the older monk, some of the biggest names in the field -- Erwin Panofsky, Colin Eisler, Julius Held, and Egbert Havercamp-Beggeman -- couldn't see it as a Hugo.   Panofsky preferred a follower of Rogier, Haverkamp-Beggeman an artist working in Hugo's style and at the same time, i.e. "circle of" Hugo. 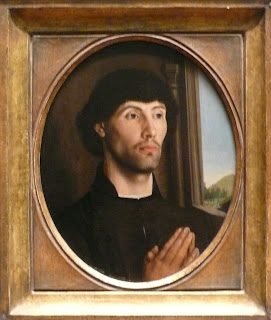 The portrait of the young man was exhibited at the Met as an Antonello da Messina before the museum acquired it.  One scholar thought it was by Jan Gossart.

Even now, when the consensus for both portraits has settled on Hugo, someone could compare the two works and rationally think it impossible that they were done by the same hand.

Attributions to Hugo are difficult.  He was hugely influential, even in Italy, and much admired in the North -- "equal to none this side of the Alps" is how a contemporary described his reputation.  Yet, despite his fame, very little is known about him.   Only one painting, the Portinari Altarpiece of 1475 made for a Medici banker in Florence, is authenticated by documentary evidence, and other attributions largely rise or fall on the basis of their similarity to that masterwork.

The Met recognizes that the "circle of" attribution of this new work may well prove provisional, stating in its annual report:  "Independent portraits by Hugo are extremely rare, and further investigation will help to properly place this splendid example within the context of Netherlandish portraiture."

Will the attribution ultimately be given to Hugo?  Art historians haven't weighed in publicly yet -- they've hardly had an opportunity.  So far as I can tell, the work has been published only once prior to the Met's acquisition, in 2008 by French auction house Tajan, where it was bid up to 20 times its low estimate.  Then it was attributed to an anonymous French painter.  In private hands for more than a century, it may not even have been publicly exhibited outside the saleroom -- until now.

Let the attribution debates begin.  In the meantime, hats off to still-new director Thomas Campbell for this acquisition.

Photos:  Top and bottom, Laura Gilbert
Posted by laura at 8:02 AM