Picasso's "Minotauromachie," one of which set a record at $2 million for a single print sold at auction in London in September, remained in the hands of its anonymous Tokyo owner when Sotheby's failed to sell it in New York this weekend.

No new homes, either, for some other prints that Sotheby's featured:  Jasper Johns's "Black Numeral Series"; two prints by Degas, including one of Mary Cassatt at the Louvre; and Warhol's double Mickey Mouse (though 40-some other Warhols garnered more than $2 million total; it's still a Pop Art world).

And Munch's "Vampire" sold for way, way below -- about one-third below -- its low estimate of $1.5 million, which makes one wonder whether reserves aren't well below the estimates these days.

So there were some problems at the upper end.

At the bottom end of the market, there were some nice reminders that prints permit people who aren't superrich to own real art, even though here too this was sometimes the result of works selling below their low estimates.  Two Kandinsky's for example, each found buyers at less than their $5,000 low estimates. 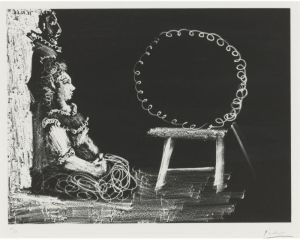 Has the economy stabilized?  The print market hasn't.
Posted by laura at 12:09 PM