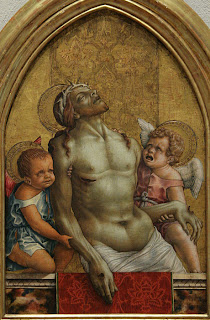 A show that includes a disturbing Crivelli (above), a knockout Durer print (below right), and a powerful yet muted Veronese (below left) can't go all wrong.  "Passion in Venice," which opened Friday at the American Bible Society's Broadway campus, skirts the amateurish, but what it lacks in coherence, it more than makes up for in the art. 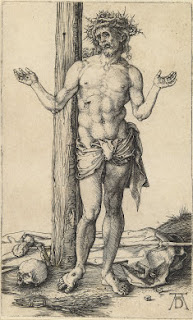 A bit of background:  "Passion in Venice" examines representations of the Man of Sorrows, an image concept that depicts Christ, wounds visible, after the Crucifixion.  It originated in Byzantine art and appeared in Italy sometime after the Fourth Crusade went wrong with the Sack of Constantinople in 1204.

The image lacks a narrative basis, and initially depicted a half-length Christ at the sepulcher.  In the West it developed both as a devotional image, showing instruments of the Passion, for example, or Christ accompanied by angels, and as a liturgical image, emphasizing Christ's wounds in reference to the Eucharist.  It also underwent some particularly Western iconographic changes, such as incorporating St. Gregory's vision of Christ or St. Francis' identification with Christ. 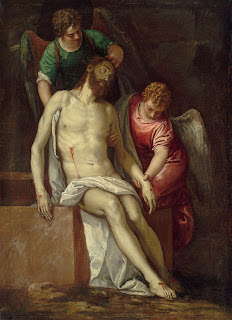 Venice apparently had a special affection for the image, giving it a prominent place in altarpieces and incorporating it into civic imagery, which brings us to this show.

It's sort of a mess.  With French, German, Spanish, Flemish, and Bohemian works interspersed, in addition to Italian works from places artistically distinct from Venice -- such as Florence and Naples -- the Venice part of "Passion in Venice" gets lost, and it's not really replaced by a consistent curatorial concept. 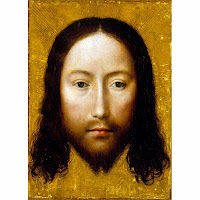 There's a grab bag aspect, too, to the inclusion of a video by Bill Viola, a printed score of Handel's "Messiah," and works that don't depict the Man of Sorrows at all, such as this Flemish "Face of Christ" (right).

Some of the labeling is just preachy.  If MoBIA wants to be taken seriously as a museum rather than as an adjunct of the American Bible Society, it's got to dump explanations about "universal culpability" and a "universal everyman." 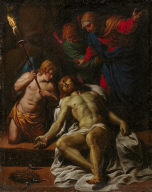 More professional display for the art would be nice, too -- Books of Hours, for example, are placed too far back in their cases to be seen -- as would a bit more curatorial rigor in making sense of why, for example, we're looking at a narrative event like the Lamentation (Alessandro Turchi's is at left).

But see "Passion in Venice" to see the art, which has been loaned from major institutions like the National Gallery of London, the Boston Museum of Fine Arts, and, here in New York, the Met and the Morgan.  Although the show disappoints, the art doesn't.

"Passion in Venice: Crivelli to Tintoretto and Veronese,"  Museum of Biblical Art, Broadway and 61st Street.  Through June 12.
Posted by laura at 2:30 PM