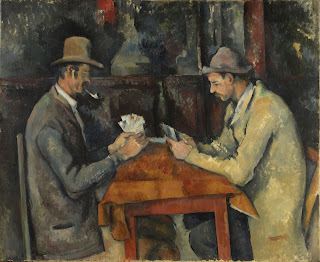 When seen at London's Courtauld Gallery, this tightly focused show, which opens today at the Met, was a small one.  Now the portion devoted to Cezanne is even smaller, because two portraits didn't make the trip across the pond.

The Met's version includes three of Cezanne's five "Card Players" -- an ambitious series that occupied him from about 1891 to 1896 -- twelve preparatory drawings and oil studies for the series, and five portraits thought to be of agricultural workers on his estate, some of whom also posed for the "Card Players."

That's it, twenty works.  But it's enough. 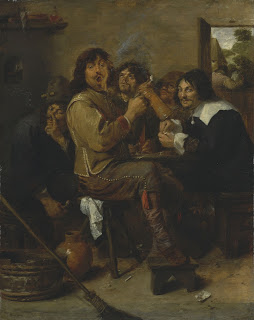 The Met has set a visual trap that's spot-on.  Before you even get to a single Cezanne, you're in a room where, from the depths of its collection, the Met has pulled out a couple of centuries' worth of prints and paintings of card players and smokers.

These works, some marvelous in themselves, show the rich traditions that Cezanne, a devoted student of the Louvre when he lived in Paris, was surely aware of.  There's a print after Caravaggio's "Cardsharps," rollicking tavern scenes by Dutch and Flemish artists (Adriaen Brouwer's of around 1636 is above), caricatures by Daumier, and a couple of etchings by Manet -- a hint of the world we are about to enter. 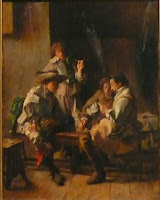 Immediately before entering the room with the "Card Players," there hangs a small costume piece by Ernest Meissonier (left), one of the most successful French artists of his time.  He died right around the time Cezanne began the "Card Players," but they may as well have been separated by centuries.

By turns moralizing, anecdotal, amusing, these works are everything that Cezanne was not, and set a framework for seeing his modernism afresh. 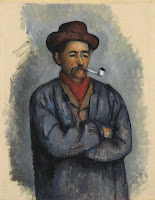 His "Card Players," genre scenes atypical for him, are considered major works -- the Musee d'Orsay version was the first Cezanne to enter the Louvre, in 1910, three years after his death -- and the gathering together of three of them, along with the preparatory works, gives the most comprehensive account to date of their construction.  It appears that Cezanne posed each figure individually in the studio, rather than posing the figures together around a table, and then used the individual studies to make up the composition in the final works.

This theory is wonderfully consistent with the artifice in the finished compositions -- the tables much too small, the proportions of the figures totally out of whack, drapery that makes no sense except pictorially. 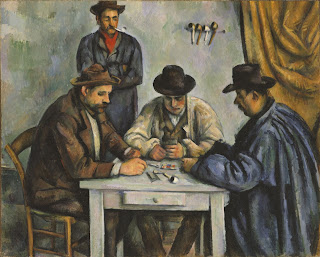 In an ironic twist, the examination of the work for this show has completely reversed the accepted chronology. It had been thought that the more highly finished paintings in the Met (immediately above) and the Musee d'Orsay were the last, but now these are seen as the first. 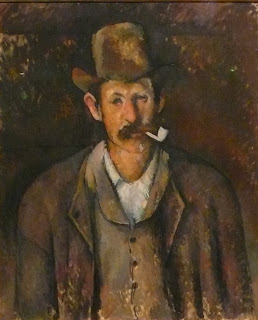 Ordinarily, this might not matter except as an art historical curiosity.  But here it means that Cezanne's final thoughts on this subject are in the two "Card Players" that couldn't be included -- one is at the Barnes Foundation, which doesn't lend, and the other's in a private collection -- and that the three paintings that are at the Met are themselves studies for these much larger works, teasingly present as life-size black-and-white photos.  If you aren't overwhelmed by the three modest-sized paintings you do see -- the largest is little more than two feet wide, the Barnes' is six feet -- this could be why. 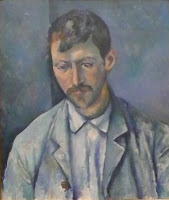 It's the portraits that really pack a wallop. (The Courtauld's "Man with a Pipe" is above. The painting at the left is in a private collection.) The third room contains five, and they're wonderful -- weighty, self-possessed, serious, both dignified and awkward, above all present.  The layers of short strokes that build up the composition in so many of Cezanne's works here find an analog in the layers of clothing -- the jacket over the vest over the shirt, collars within collars, each layer given a separate bulkiness.  Here, too, are the emotional distance, the genius of leaving patches of canvas free of color altogether, the bold strokes of the brush.

Images:  Meissonier and bottom two portraits, Laura Gilbert.  All others courtesy Metropolitan Museum of Art.
Posted by laura at 6:56 AM