If you haven't gotten any lately and you want to set your heart aflutter, go to the Met, walk up the grand staircase, hang a left into the Robert Wood Johnson Jr. gallery, walk to where the corridor narrows, and plant yourself in front of this photograph taken by Leon Gerard around 1857 (click to enlarge): 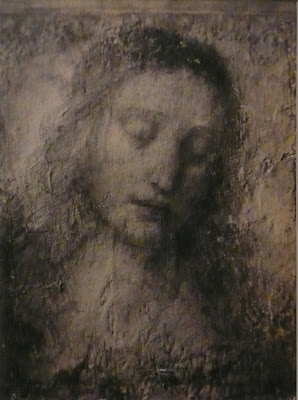 It's an image, an albumen silver print, of Leonardo's preparatory drawing of Christ for "The Last Supper." That is, it's what Leonardo's drawing (then and now in the Brera Museum in Milan) looked like a century-and-a-half ago.

At first glance you think, "What a wreck!"  The paper is badly abraded and appears buckled, the contours of the drawing reinforced by other hands.  But still, Leonardo's magic shines through, a testament, captured by a photograph, to what was.  It's breath-taking (unlike the drawing in its present state, which, judging from reproductions, is ghastly). 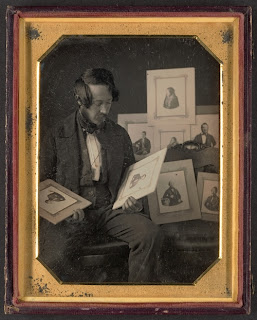 Turn to the right and you'll see a deep-gray, light-protective curtain hanging on the wall.  Lift the curtain and take in the lush detail of this dagguerotype taken by William Langenheim, one of Philadelphia's top dagguerotypists in the 1840s and 50s.


In the Robert Wood Johnson Jr. gallery itself are several  just-opened mini-shows selected from the Met's vast collection of 15,000 drawings and 1.5 million prints. 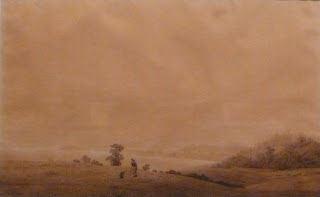 A group of German landscapes is overwhelmed by a large, wondrous sepia landscape by the great romantic artist Caspar David Friedrich (above) -- by large, I'd guess something like 2 feet by more than 3 feet.  It's a small figure contemplating a vast nature, and shows Friedrich finding his trademark theme already in 1805-6, early in his career. 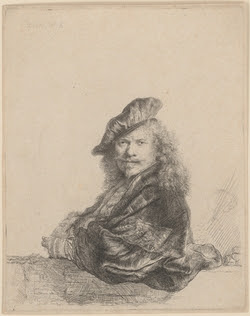 There are more than a dozen artist portraits and self-portraits.  Outstanding among them -- no surprise here -- is a Rembrandt 1639 etching in which the artist is done up like a courtier (left). 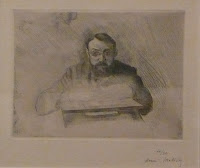 But there's also this unexpected Matisse intaglio (right) where light seems to emanate from the artist's hands, and a Cezanne of 1880 with wonderful, assertive marks.
Jaw-droppers include Seurat's portrait of his artist-friend Edmond-Francois Aman-Jean (below left), a large Conte crayon drawing that was his first exhibited work, and a miniature by the Netherlandish artist Simon Benig (below right), tempera and gold leaf on parchment from 1558. 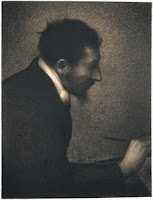 In how many ways can women be portrayed as threatening or be celebrated, objectified, or simply beside the point?  The Met here gives us eight, in another mini-show, and it's an impressive list: by Degas, Gauguin, Munch, Klimt, Schiele, Otto Dix, de Kooning, and Sigmar Polke.  The Dix 1920 "Syphilitic" (below) whose brain is being devoured by women who gave him the disease, next to the anger in the de Kooning, next to the dehumanized sex objects in the Polke -- it's not easy to take. 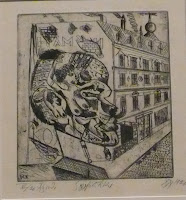 After your tour, sit down, take a breath, repeat. On your second go-through notice the lovely Maarten van Heemskerck from the 1530s of antique sculptures in Rome that shows this Netherlandish artist at his best, with strong fluid lines and unusual vantage points.

Photos: Gerard's Leonardo, Friedrich, Matisse, and Dix by Laura Gilbert.  All other images are from the Met's website.
Posted by laura at 1:19 PM