Hirst Out, Anatsui In 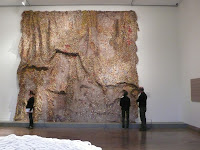 At last, Ghana-born El Anatsui gets to sit at the adult's table:  His work has been on view at the Metropolitan Museum for almost three years, but only now is it being shown where it belongs, in the contemporary art gallery (above).

The Met introduced its first Anatsui purchase, "Between Earth and Heaven," in early 2008.  It's a beautiful piece made with his signature bottle caps and other detritus.  At the time, the Met hailed the artist as "the most important contemporary African sculptor," an assessment hard to argue with.  He'd been the star of the most recent Venice Biennale, and he was then and is now handled in New York by top-flight contemporary gallery Jack Shainman.  His work is in the collections of the Centre Pompidou and MoMA, among others, which specialize in modern and contemporary art.

But when the Met installed the piece, it was hung not in the contemporary gallery but in a space devoted to the arts of Africa, which is mostly filled with anonymous ceremonial objects or objects made for the tourist trade.  I haven't read every wall label there, but I'd guess that "Between Earth and Heaven" (original installation, above left) is the only work with a title and an artist's name attached to it, let alone an artist who is also a university art professor and lauded as an art star. 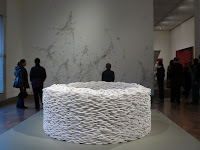 However strong Anatsui's connection to traditional African art, it seemed he was being marginalized.  There was the obvious comparison with how the Met treated the white South African William Kentridge -- when it displayed his drawings in 2005, they were in a space devoted to temporary exhibitions of modern and contemporary art.

It also seemed that the Met was abdicating a responsibility to take the lead in writing art history in an era of globalization.  If it bought a painting by hot contemporary Chinese artist Yue Minjun, would it be shown ethnographically, among Chinese vases and tomb sculpture, or with contemporary art? 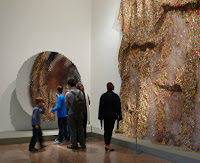 About Anatsui's place we need worry no longer.  The Met acquired a second Anatsui, "Dusasa II," and when Damien Hirst's $8 million shark left the Met's contemporary art gallery to return to hedge funder Steve Cohen a couple of months ago, "Dusasa II" was one of the works that took its place.  It's quite at home amid pieces by Anish Kapoor (born in India, living in London), Clinton Menezes (Portuguese, born in South Africa), Mouir Shahroudy Farmanfarmaian (Iranian), and Liza Lou (American).  (Two additional gallery views are shown here.) 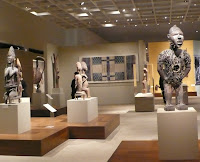 "Between Earth and Heaven" is still in the African arts gallery, but now hidden behind a temporary wall (left).  Show one Anatsui, hide another?
Posted by laura at 7:55 AM