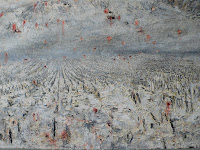 Anselm Kiefer.  He's nothing if not ambitious.  But his ambitions here lead him over the cliff, and it's nothing short of appalling.

We've got a lot of the usual Kiefer in "Next Year in Jerusalem," his first solo show in New York in eight years -- the decay and distress, the death and regeneration, the rusted, dirty, and torn materials. We've also got vitrines encasing most of the pieces.  And a big black shed. 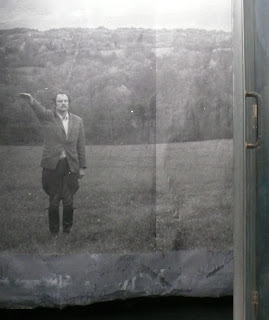 And the expressly Jewish context of "next year in Jerusalem," -- the last words of the Passover seder that are both a reminder of the destruction of the Temple and an expression of hope -- which Kiefer perverts at every turn.

Anyone who's read Kiefer's bio knows that it always starts with the fact that he was born German and Catholic in the last months of WWII and that he's made his career by revisiting what it means to be German, whether in Goethe or the Nazis or mythology or the landscape.  That work can be moving and powerful.  Not here.  It's mostly just plain tired and confused and dismaying. 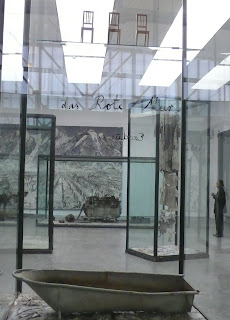 More burnt books, more sooty clothes.  If you've seen Kiefer's beautiful painting at the Met, you won't learn anything new from the paintings here.  And there's the black shed that actually recycles his art -- it contains blowups of his Nazi salute photos from decades ago (above).  Sometimes the literalism is too easy -- the Tree of Jesse is a real orange tree, the Burning Bush is a bush.  The labels -- large handwritten titles on the outside of the vitrines -- are annoying affections. 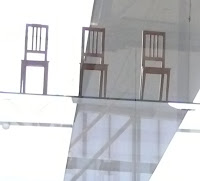 And then we get to the symbolism or allegory or whatever you want to call "meaning" in this muddle.  "The Red Sea," a direct reference to the Passover story, is a rusty old boat with three chairs hovering (above, and detail at right) -- Kiefer's representation of the Trinity.  Three chairs, again, in "Jeremiah, Baruch."  Mt. Tabor, where Jesus appeared to Moses.  The Tree of Jesse, from which Christ's genealogy is traced.

"Shekhina," a visually arresting work, is a beautiful white dress pierced by shards of glass.  Shekhina is a Hebrew word that refers to the feminine presence of God in the community.  I wanted to see this piece as Kristalnacht, but no -- she's waiting for the Messiah. 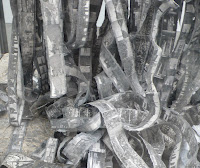 "The Destruction of the Temple" -- if you've ever wondered whether Kiefer's mourning for Germany includes mourning for the Jews, you may have your answer here.  None of the lamentations that Kiefer's known for.  It's made of unspooled film of photos, photos of towers that Kiefer himself built (detail, left).  Walk around with the notes available at the gallery desk so you can read that in Judaism destruction does not lead to new beginnings (whether this is an accurate statement of Jewish belief I have no idea).  From his art, it's clear that Kiefer believes just the opposite. 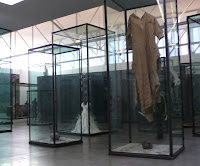 And what's with the vitrines?  They're supposed to recall reliquaries -- which are mostly associated with Catholicism and not Judaism -- but they look more like displaced store windows or transparent wardrobe closets.  And there are way too many of them for even Gagosian's vast space.

At its best, Kiefer's work is solemn, weighty, reflective, a reminder of art's power to add to the experience of being alive.  He's not good here, where he flirts with playing God to the Jews.