What is it with MoMA?  Why is it distancing William Kentridge from his own history? 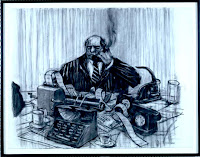 MoMA is showing a lot of good Kentridge right now, and a lot of it concerns two fictional characters of South Africa's apartheid -- Soho Eckstein, the oppressive industrialist, and the sensitive Felix Teitelbaum.  Yet read the wall labels, and these two could just as well be named John Jones and Richard Smith.

MoMA has performed a bit of ethnic cleansing here, never once mentioning that Kentridge is Jewish or that he has chosen overtly Jewish names for perpetrator and sufferer alike.  What rich interpretive territory it has shunned!

To be a Jew in South Africa during apartheid, what does that mean?  What if one's grandfather had fled the pogroms in Lithuania, as Kentridge's had, to become part of the white, privileged class that oppressed South Africa's blacks?  How does an artist deal with the irony and tragedy of this, his own history?

What if one's father had made a kind of penance and became, as Kentridge's did, a lawyer famous for defending the victims of apartheid?  How does an artist deal with his historical inability to be a hero like his father?  And what if the father, well before apartheid's end, says in effect "To hell with this" and becomes Sir Sydney in England?  What does it mean that Kentridge stayed in that hell and so strongly self-identifies as South African?

These questions are fundamental in interpreting Kentridge's art, or at the least in providing adequate context.

MoMA's curators know very well that Kentridge is Jewish, and it obviously has a place in his art.  So why the silence?  Is it callous indifference, or fear that using the wrong phraseology -- in a city where all terms Jewish are loaded -- could lead to stupid charges of anti-Semitism?  Whatever the reason, MoMA has abdicated its responsibility to historical integrity.
Posted by laura at 10:41 AM