Metropolitan Museum: "The Art of Illumination: The Limbourg Brothers and the 'Belles Heures' of Jean de France, Duc de Berry" 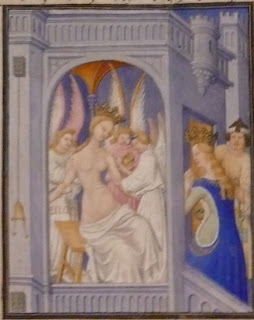 It's an eye-opener, the Duc de Berry's prayer book:  Some of the female saints are half-naked, even lascivious.

Reviews of the just-opened Met show will tell you the following: (1) Now is the only chance you'll have to see all 172 images in the "Belles Heures" at the same time.  (2) The "Belles Heures" is an acknowledged masterwork -- with microscopic details and astonishing naturalism -- by the Limbourg Brothers, who tragically died young, possibly from plague, in 1416.  (3) The "Belles Heures" is an unusual prayer book because it is so lavish and includes seven story cycles beyond the usual offerings.

The better reviews will also describe some of the Limbourg Brothers' pictorial daring:  two narrative scenes in one image, for example, or one of the very rare night scenes in medieval art. 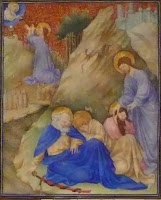 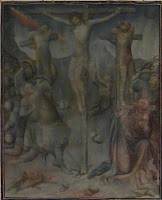 But here's something I doubt you'll see elsewhere, because people won't believe their lying eyes:  This religious text is illustrated with some odd, unexpectedly sensual imagery. 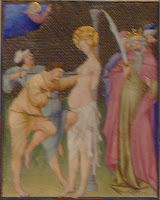 Take St. Catherine.  Twice she's presented naked from the waist up.  The image at the top shows her in jail.  The other shows her bound to a column and tortured. 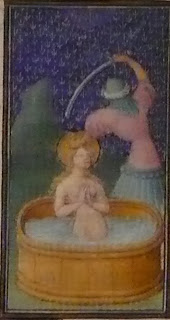 Consider how radical this nudity is.  In medieval religious imagery, female nakedness is reserved for fallen women -- Eve, the Magdalene, those condemned to Hell in the Last Judgment.  Virginal saints are modest.

No text requires St. Catherine to be imprisoned half-naked.  According to legend, she was thrown in jail without food, but not without clothing.  And nudity is not a necessary part of the pictorial narrative; the queen, for example, is not bringing St. Catherine clothes.

The legend of St. Cecilia has her killed while bathing, but why reveal her naked breasts when she could have easily been shown with just her head above water?  And why show St. Catherine being tortured so exposed, when her hair could have covered her breasts, or she could have been strategically placed behind the column?

Then there's a Christian being tempted by a woman moving her hand up his thigh.  Though that sight prompted St. Anthony to retreat to the desert -- and he's shown on the right, recoiling -- all the visual attention is really on the lasciviousness. 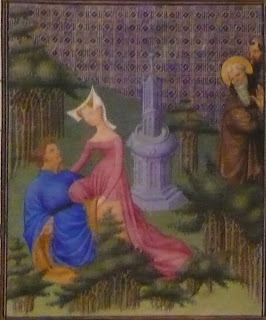 The Duc de Berry decided the Limbourg Brothers should illustrate the "Belles Heures," and one can only assume that these images were the ones he wanted to look at.  Did he pray with this book?  Doubtful -- he owned many prayer books.  It is more likely that he eyed it for his private pleasures.

These observations are an invitation to acknowledge the private aspects of the "Belles Heures," not just its place in art history, and to study other illuminated manuscripts as objects for contemplation that is personal, not devotional.

A couple of other observations:

The Limbourg Brothers are considered among the best of all European illuminators.  The glazing, the minute detail, the many colors, the gold leaf -- how did they do it?  For one thing, according to the Met curator, they "must have had magnification."  He examined each page under binocular microscopy and saw things not visible to the naked eye.

An informative video answers others questions.  The artists used quill pens, not brushes with one or two hairs.  If mistakes were made, a pen knife was used as an eraser.  The Duc de Berry could afford the best materials, and the top-quality vellum (prepared animal skin) could withstand several erasures.  The video also shows how gold leaf is applied.

But the work of the Limbourg Brothers is the swan song of this medium.  A mere ten years after they died, Jan van Eyck would paint his luminous, astonishingly detailed oil paintings on panel, and Gutenberg unleashed his printing press mid-century -- developments that placed scribes and illuminators in the background.

Photos by Laura Gilbert
Posted by laura at 7:01 PM