Superstar Koons' Sideline: Loaning Old Masters to the Met, Including the Dreadful. Meantime, 51 of His Own Holdings Appear Online

Jeff Koons personally collects Old Masters, many of them recently purchased and some for record-breaking auction prices.

He's getting plenty of wall space for them from the Metropolitan Museum, which, as any serious collector knows, generally gooses up their value.

I found four of them there last week, including a sort of a dog of a painting that may be a workshop production instead of by the master on the label.  All are identified as from an unnamed "private collection."

What's going on?  Neither Koons nor the Met is talking.

The most recent Koons-owned loan, hung within the last few weeks with the "private collection" tag, is surely the most problematic.  It's a bust-length Christ the Met labels as a Quinten Massys, the leading Antwerp painter of the early 16th century. (Enhanced camera technology makes the image I took, right, appear far superior to the actual painting.)

But is it a Massys?  It's the most lifeless painting in the Met's superb Netherlandish galleries -- in truth, it's conspicuous because it's so not up to snuff there.

The museum, notably, has hung it a room away from the Massys works it actually owns -- fine or amazing paintings each.

The Christ was also represented as a Massys by Sotheby's in a 2008 auction, where it sold for $1.1 million and where Koons seems to have acquired it.

But Sotheby's presented it with big red flags.  It had no provenance, a huge caution.  And there's another version of the painting, signed, in the Prado -- are both by Massys?

Another warning appeared in the catalogue.  To authenticate the painting, Sotheby's had sent a photograph (a common auction house practice) to the highly respected art history professor Larry Silver, who penned the 1984 Massys catalogue raisonne.

Based on the photo alone, Professor Silver, according to the Sotheby's catalogue, considered the work autograph but "does not rule out the possibility of some studio participation."

This reporter contacted Silver last week to ask if he had ever seen the painting in the flesh -- he had in fact finally just seen it at the Met -- and we spoke about its authenticity.

Silver told me that until Sotheby's sent him the photo, the work was "unknown" to him, a complete "surprise."

When asked whether there was studio work here, he replied that "No one cares about studio work anymore except auction houses and museums."

(Further inquiry into this assertion has been delayed.)

He explained that Massys was at the "end of his career" when this work was made and possibly "losing his manual dexterity" -- the painting is dated 1529, a year before the artist's death.  So, Silver said, he believes there would be "increased participation" by the studio.

Was he suggesting it actually is a studio work?  Silver told me it was an "extremely fine picture" and better than the Prado version, which itself had at one time been "considered studio."

Is it naive to expect a museum -- an educational institution, after all -- to be more forthcoming about attribution when it displays such a problematic work, even if, as in this case, the lender is a famous artist who is becoming a force in the Old Masters market and whose own works the Met may one day want to own?

As it happens, Koons' "anonymous" loans apparently began in 2008, the year the Met showcased his own "Balloon Dog" and other sculptures in its prestigious "Art on the Roof" series.

That June, the Met needed to find a place for Koons' egregiously large "Hercules and Achelous" -- an eight-foot-wide painting -- by Cornelis van Haarlem. 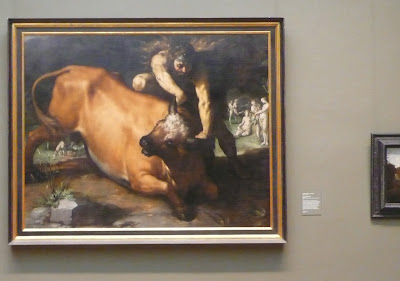 This flat brown mass of cartoonish bull was bought for $8.1 million, reportedly by Koons -- an auction record for any Dutch Mannerist painting and a price that induced gasps in the bidding room -- but who was he bidding against?  The final players made bids by telephone.

Initially, the Met installed it in a gallery full of paintings by Rembrandt and Hals -- in a fit of insanity, perhaps.  It now hovers like an oversize cruise ship amid a sea of Dutch "little masters" (see installation view, above).

Let's not skip over the fact, though, that one of Koons' loans is glorious -- a St. Catherine wood statue by the great German sculptor Tilman Riemenschneider (left).  It had graced the Met as a loan before Koons bought it (for $6.3 million, a record for the artist), and now it's back on loan in the Medieval galleries.

Then there's Koons' loan of "Adam and Eve" by the talented 18th-century court painter Francois Lemoyne (below), a lovely oil on copper that Koons apparently picked up in 2009 for 1.3 million Euros, another record.  It went on view a couple of months ago as a pendant to an Adam and Eve by Lemoyne's student Charles-Joseph Natoire.

Meantime, 51 works apparently now in Koons' collection can be seen online (at least as of 9:00 a.m. today) at a website that doesn't identify what it is or who owns the works shown, or who even owns the site:  www.collectionnewyork.com.

This reporter believes it's a listing from Koons' collection.

Koons was photographed in his home with works posted there, including a Courbet, a Magritte, and a Dali.  He is known to have loaned another Courbet on the site ("Femme Nue," which at $3.1 million also set a record), and has acknowledged owning still other posted works, including the listed Fragonard.

Those familiar with Koons' creations won't be surprised to find, in addition, a work depicting comics character Dagwood Bumstead having at Blondie. 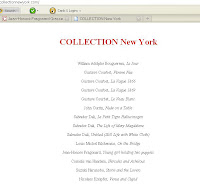 Phone calls and an email to the Met for comment on Koons' ownership of the works on loan, and on the purported Massys, were not returned by post time.  A phone call and an email to Koons and an email submitted to the collectionnewyork.com website yielded no response.