"That Is Then. This Is Now": Pitch Perfect at Cue 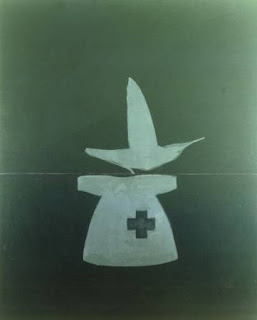 Economic distress, war, acute skepticism toward institutions.  Painting on the defensive, artistic pluralism verging on aimlessness.  It seems like right now, but it's also the 1970s.

"That Is Then. This Is Now" at the Cue Art Foundation looks at nine artists prominent in the 70s and compares their work then with the work they are doing today.  Beautifully put together -- no surprise there, since it's curated by Irving Sandler and Robert Storr -- it's also one of the more thoughtful and provocative gallery shows on the scene.

The pieces from the 70s have a raw, anguished conviction that hits hard.  Take a look at Lois Lane's dark "Untitled" (above) or Mike Glier's "Clubs of Virtue" or Donna Dennis's "Subway With Lighted Interior -- or any of the works, really -- for a sense of how embattled, intellectually intense, and often ugly a time it was.

The more recent work (Glier's "August 10, 2007: Mount Duval" is shown below) is calmer but consistently rigorous, committed, and intelligent, especially when compared with the slick creations that still pass for art these days. 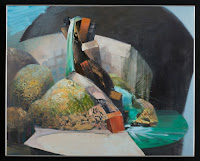 Cue is generously giving away its catalogue for the show, which contains a dialogue between Sandler and Storr and essays by Peter Plagens, Martha Schwendener, and Emily Warner.