Appropriation artist Richard Prince (below right) has decided to appeal the smackdown he received last week in Federal Court.

The court ruled that he had infringed the copyright of photographer Patrick Cariou (below left) by using "at least" 41 photographs from Cariou's book "Yes, Rasta" in a series of paintings by Prince called "Canal Zone" that had been exhibited at the Gagosian Gallery in Manhattan.

Prince has now hired the big-gun law firm Boies Schiller & Flexner for the appeal, it was reported today by "The American Lawyer."  An announcement is also on the firm's website. 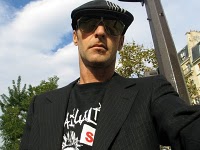 Prince, in his losing effort, had argued to the court that his use of Cariou's photographs came within the "fair use" exemption of the copyright law, which allows limited borrowing for reporting, commentary, and the like.

But the Federal District Court in Manhattan held that for "fair use" to apply, the new work must be "transformative" of the original.  Prince's work (one from "Canal Zone" is shown below) was not transformative, the court found, because it did not "in some way comment on, relate to the historical context of, or critically refer back" to Cariou's work.

Under this test, Prince helped sink his own case by testifying at deposition that he had no interest in the meaning of Cariou's photographs.

The decision seems to have caused a kind of panic among some in the art world, not least because the court ordered that unsold "Canal Zone" works be surrendered for "impounding, destruction, or other disposition, as Plaintiff determines," and that owners of the works from the series be informed that they cannot legally display the infringing paintings.  (As recited in the decision, eight works sold for a total of $10.48 million and seven were exchanged for works of art valued between $6 million and $8 million.) 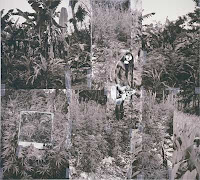 The apparent cherry on the sundae was the court's finding Gagosian also liable as both a direct and contributory infringer.

Boies Schiller is no stranger to high-profile cases.  It was the losing firm in Bush v. Gore and is now involved in the attempt -- successful in the lower court but now on appeal -- to overturn California's Proposition 8, which outlawed gay marriage.

Boies is also hugely expensive -- check out a retainer agreement here, with its nonrefundable retention fee of $250,000. The firm racked up $7 million in fees defending the Andy Warhol Foundation in an authenticity lawsuit, and that case never even went to trial.  (The plaintiff dropped his suit because he could no longer afford to litigate, he said.)