For the Love of Glitter: Is Damien Hirst's Diamond Dust Actually Crushed Glass? 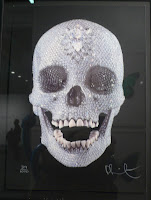 Damien Hirst has brought his retail shop "Other Criteria" to the Armory art fair, where he's offering, among other works, a print of his diamond-encrusted skull "For the Love of God" (right).  He's done several print versions of it.  This one is dated 2009.  The wall label states that it's a silkscreen with glazes and "diamond dust," which is also how it's described on Other Criteria's website.

There actually is such a thing as diamond dust that comes from real diamonds, but this isn't it -- at least according to the nice salesman who was minding the store.  He was sorry to tell me, he said, that it's actually crushed glass, adding that Hirst had tried to use the real thing here but it didn't work aesthetically. 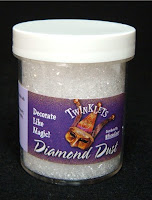 Perhaps the Hirst factory used something like these crushed-glass Twinklets (left) available from a crafts store for about four bucks.  The term "diamond dust" may be well known to low-end crafters looking for glitter.  But what about the buyers who fork over $2,000 for a Hirst print based on a skull covered with actual diamonds?  No one at Gagosian, Hirst's gallery, would speak to me by phone.  They requested I send a query instead by email, which I have.

Hirst is as much known for his stupendous marketing as for his art.  It's on full display here, and not just with the fairy dust.  The print is an edition of 1,000, so at $2,000 per he's aiming for a cool $2 million.  With about 700 sold, according to the salesman, he's well on his way.