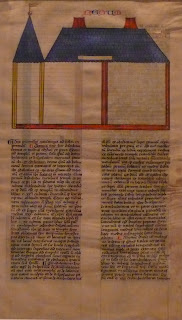 How did medieval scholars imagine Solomon's Temple?  One concept is the elevation of the Temple shown right.  It's one of six illustrated manuscript leaves, acquired this year by the Met, from one of the most important biblical commentaries of the late Middle Ages, Nicholas of Lyra's "Postilla Litteralis."

Unannounced, the Met has put two of them on display: the elevation and the curtains of the Tabernacle (below), described in Exodus as "violet and purple, and scarlet twice dyed."

They're big -- 16.5 x 9.75 inches -- and so beautiful in their simplicity that it's a shame the Met isn't exhibiting the other leaves as well.  They show the floor plan of the Tabernacle, the "brazen sea" (a large basin in the Temple), Levite camps around the Tabernacle, and an initial "V" in a commentary on Nehemiah. 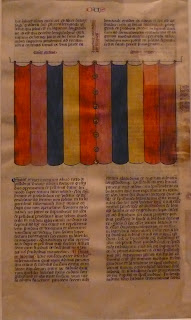 Nicholas (1290-1349) was on the theological faculty of the University of Paris.  Like other medieval commentators -- the Bodleian Library has a nice array of illustrations here-- Nicholas made his own architectural drawings to illustrate his text.  Whether the Met's new acquisitions follow his drawings, I can't say.  They're dated 1360-80, not too long after his death.

The "Postilla" occupies an odd place in exegetical history, almost a bridge between medieval Jewish scholars and Reformation theologians.  Nicholas argued that the literal meaning of the Bible was preeminent, and, though he wrote anti-Jewish tracts, he looked to earlier Jewish commentators like Rashi (1040-1105) to determine its meaning.

Yet, the "Postilla" also had a profound influence on 16th-century Reformers, so much so that it was said: "If Lyra had never played his harp, Luther would never have danced."

In other news on the medieval front, what's a great encyclopedic museum like the Met to do when it's left a group pretty much out of the encyclopedia?  Well, for one thing, it can work out some loans.

A couple of years ago, the Met started partnering with the Jewish Theological Seminary up on 120th Street to exhibit, one at a time, some Jewish illuminated manuscripts from JTS's collection.  One of these was included in the Met's magnificent 2009 exhibition "Pen and Parchment: Drawing in the Middle Ages." 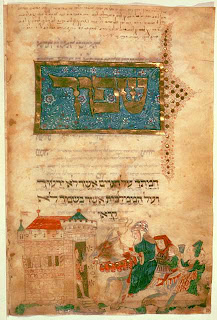 In early April the Met is initiating a three-year-long series of loans of Jewish illuminated manuscripts from other American and European institutions.  It's starting with the Washington Haggadah from the Library of Congress, dated 1478 and signed by the scribe and illuminator Joel Ben Simeon, who worked in Germany and Italy.

The Haggadah tells the story of the Israelites' exodus from Egypt and is read at the Passover seder, a joy-intended meal during which four glasses of wine are drunk.  The Washington Haggadah is tempera and gold -- and, from what I've read, wine stains -- on parchment, a luxury item that was actually used.

The pages of the Haggadah will be turned each month, so there will be an opportunity to see several of its sometimes whimsical illustrations.  One page, for example, shows a man roasting meat while blotto from drinking wine.  During the seder, the door is opened for Elijah, a symbolic welcome to the Messiah.  In the Washington Haggadah it's not just Elijah who approaches but his whole family, who jostle for position on a donkey (above). 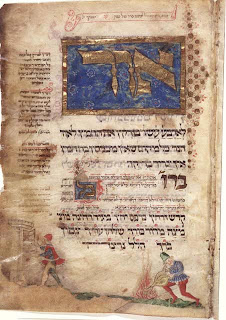 The Washington Haggadah will be exhibited with contemporary works of medieval art in other media from April 5 through June 26.