Yes, art can shoot an arrow through the heart of the bourgeois West.  And yes, art can reveal meaning unmediated by the typical, almost requisite measure of distrust.  And most definitely, a ham-handed approach to political themes will stink out a show.

What's worthwhile in the just-opened "Project Europa" is that Jens Haaning does the first and Francis Alys does the second.

As for the rest -- well, this show, with 19 artists looking at Europe after the 1989 fall of the Berlin Wall, proves once again that politics and art don't sit well together.  But it's worth the trip to Columbia University's Wallach Art Gallery just to see the Haaning and Alys.

Haaning is represented by 10 photos of first-generation male immigrants in Denmark who are identified by Muslim-sounding first names (Aurangzeab above and Murat left).  They're shown full-length, seated or standing, matter-of-factly posing for the camera but presented in the manner of fashion magazine shots.  The styling information about their clothing and jewelry, with price in Danish kroner, is printed in the corners:  "Socks by Adidas 79DKK at Sport Master.  Underwear by L.O.G.G. 59 DKK at H&M," and so on. 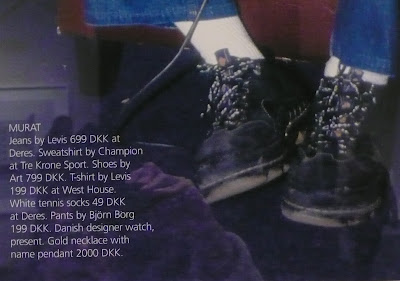 It's totally disjunctive to see "The Other" identified by Western brand-name clothing and packaged like a fashion spread.  A send-up of the trappings of power and style and at the same time a democratic equalizer.

Alys's "Nightwatch" is a video of a fox let loose one night in London's National Portrait Gallery and filmed by its surveillance cameras.  Of course it's about government surveillance set amid a history of British power, but what struck me flat out was how, through the eyes of a disinterested camera, I felt such sympathy for that fox -- by turns bewildered, wandering, trotting, lost, looking for a place to sleep.

Maybe only in watching an animal can we tolerate emotions in contemporary art that might otherwise be considered too hopelessly naive to be taken even half-seriously.

The premise of "Project Europa" is that Europe has changed, and who could argue with that?  The end of Communist Eastern Europe is huge.

But this show is impossibly inept.  Not because it's overcurated, which any show of this ambition is apt to be, with loads of wall text and overbroad categories.  And not because of its simplistic history -- implying that terrorism, xenophobia, and religious intolerance are new in Europe.

The show fails because most of the art is reactionary.  As so often with art that skirts the political, there's a fetish for realism, as if that's the only medium for truth-telling.

Some of the work is pseudo-journalism with a frame, like the double channel video of war footage shot in Yugoslavia by Reuters and ITN but with an artist's name attached.  Some is so literal as to be tedious -- overcrowded living conditions shown by painting crowded rectangles.

Some is just tired, as if anything new could be learned from a staged video of a car blown up with accelerant or from the same-old, same-old graffiti of Dan Perjovschi, the Romanian artist who was a dissident under Communism and whose site-specific work in the hallway before you enter the gallery proper is perhaps the greatest disappointment of this show.

Tacita Dean, on her way to the Venice Biennale, has six smallish, lackluster photos of the partially stripped East German parliament building.   What I found most engaging here was that the photos were loaned by Baker Botts, the law firm of James Baker III, former Secretary of State to the first President Bush and still a big dog on the national scene.  Now that's politics meeting art.

Images:  Second and third photos by Laura Gilbert.  Others from Resnicow Schroeder.
Posted by laura at 2:41 PM