Cezanne Survives the 'Death of Modernism!' and Other Hot Upcoming Shows

A preview of the shows that should generate heat during the cold winter months in New York. 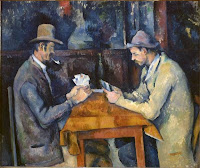 Small Show Has Huge Impact.  That's the word from London, where "Cezanne's Card Players" is currently on view at the Courtauld Institute.  It's been receiving ecstatic reviews, with one powerhouse in 19th-century studies saying it is "worth travelling the earth" to see Cezanne's still "astonishing" portraits hung side by side.  The exhibition brings together for the first time three of the artist's five "Card Players," including the Met's (the Courtauld's is shown here), and related paintings, oil studies, and drawings.

Rooms with a View:  The Open Window in the 19th Century, opening April 5, Metropolitan Museum 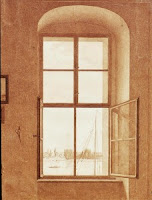 Despite its unfortunate title, this show, organized around a theme rife with contemplation and longing, promises some great stuff -- i.e., works by Caspar David Friedrich and Adolf Menzel, two 19th-century painters inadequately represented in New York.

Menzel in particular deserves to be better known, and I hope this show will prove it.  His concerns with capturing modern life and the effects of light and atmosphere arguably put him in the same camp as the Impressionists -- he lived from 1815 to 1905, so he was roughly their contemporary -- but he was very, very German, and the collections here are very, very French.

(Above, a sepia drawing by Friedrich in the collection of Vienna's Belvedere.) 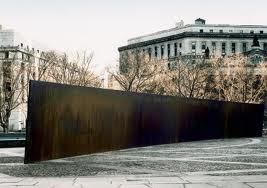 The first retrospective of Serra's drawings, organized with SFMOMA and the Menil Collection, sounds like a whopper.  Serra has worked in unusual media, including melted paintstick, and on a monumental scale -- floor to ceiling and as wide as 20 feet -- making this the type of exhibition where reproductions can never suffice.  Some 40 years of work will be on view, including responses to the removal of his sculpture "Tilted Arc" (above) from Federal Plaza, sketchbooks, and films.

Picasso, one of the few artists in all of Western art who can accurately be described as protean.  MoMA will be presenting a small window on his work, just two years, but during that time he made sculpture as it had never been seen before.  The bookends to this exhibition are a paper guitar of 1912 and a 1914 sheet metal guitar.  The show will include 70 works from more than 30 public and private collections. 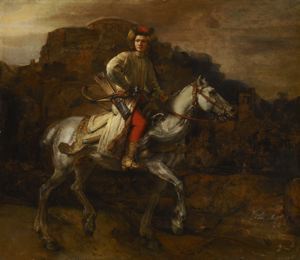 The Frick is doggedly hanging on to its attribution of "The Polish Rider" (right) to Rembrandt in its display of five paintings from its collection.  The new meat should be downstairs in the tiny special exhibition space, where it will be showing 66 works on paper and offering an opportunity to compare works attributed to Rembrandt with those attributed to his circle.

This midcareer retrospective will look at 25 years of Ligon's art with approximately 100 works -- paintings, prints, photos, drawings, video, sculptural installations, and neon reliefs.  The monograph accompanying the show sounds equally ambitious:  as described by the Whitney, it will have "an essay by curator Scott Rothkopf considering the artist's entire career, a text exploring the themes of literature and democracy in Ligon's art by the distinguished curator and critic Okwui Enwezor, and contributions by Columbia University professor Saidiya Hartman, New Yorker staff writer Hilton Als, LACMA curator Franklin Sirmans, and LA MOCA curator Bennett Simpson."  The show travels to the LA County Museum in the fall.

Will Ryman, The Roses, on display on Park Avenue's medians beginning January 25 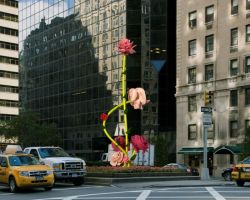 For those who can't wait till spring, the Park Avenue medians from 57th to 67th Streets will display the sculptor's roses, some as high as 25 feet.  (The rendering here is from the New York City Parks and Recreation Department's newsletter, "The Daily Plant.")
Posted by laura at 1:01 PM