In the junkyard auction of "urban art" at Bonhams Tuesday, a Shepard Fairey "Change" poster for the Obama campaign signed by the artist sold for 4,560 pounds.  Without the buyer's premium, that would be a little over $6,000.  A nice price for a 5,000-copy print. 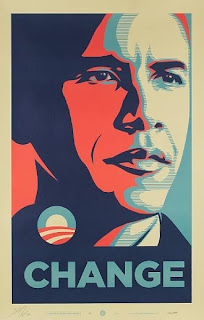 Except this one had a letter of authentication from Vice President Joe Biden's office.  A cool sideline, vouching for autographed copies of the boss' campaign posters.

As the Bonham's catalogue noted, "This lot is accompanied by a letter from the Office of the Vice President Elect confirming that the work is from a signed edition of 200."

That office may not be wholly credible when it comes to art authentication.  The catalogue also states that "this print is believed to be one of only 200 which were handsigned by the artist and given to members of Obama's campaign team."  (Emphasis added.)

So how many posters were thus "authenticated"?  Shortly after the Bonham's sale, a "Change" poster went up on eBay, this one also claiming to have a letter from the Office of the Vice President Elect.  Asking price:  $4,999.

It's tempting to speculate why the "Change" posters are being dumped -- another, number 153, was up for grabs at Swann's in November.  Change we can no longer believe in?  Maybe failed economic policies have required some poor souls to cash in for a few thou.