Christie's Old Masters Preview: The Ones to Watch

A painting stolen for Nazi war criminal Hermann Goering, one of the few Memlings still in private hands, and a work that might or might not be by the strange Arcimboldo are among the offerings at Christie's Old Masters auction next week.  The highlights:

Hans Memling, Virgin Mary Nursing the Christ Child.  One of the few paintings by the great 15th-century Netherlandish artist remaining in private hands, this tiny devotional image (less than 7 inches in diameter) has an archaic gold ground but also the sweet delicacy one expects from Memling, and masterful detail.

Estimate: $6-$8 million (the highest in the sale), with a third-party guarantee.

Giambattista Tiepolo, Arrival of Henry III at the Villa Contarini.  This large, 28-by-42-inch oil sketch for the fresco decoration of the Villa Pisani has a provenance more interesting than the event depicted (the French king stopped there once).  First recorded in the possession of a friend of Tiepolo, it was later owned by the Rothschild family, then seized by the Nazis for Hermann Goering.  After the war, it was recovered by the Monuments Men, returned to France, and restituted to the Rothschilds.

Estimate:  $4-$6 million, and perhaps worth every penny -- it's darn good-looking, with sophisticated color, and the fresco, according to the catalogue, is a wreck. 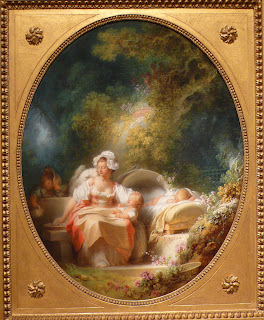 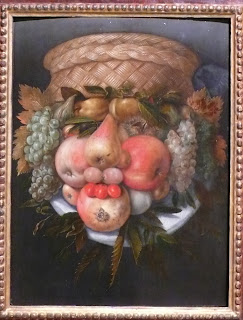 It was sold in 1999 as "manner of Giuseppe Arcimboldo" and flipped the next year at Sotheby's as autograph.  Of the latter, connoisseur and dealer Richard Feigen wrote in the September 2008 Art Newspaper, "A painting attributed to the rare painter, Arcimboldo, was sold at Sotheby's, New York, for $1.5m.  It has never been accepted as by Arcimboldo himself."  Christie's catalogue calls the attribution "secure."  What will the market think? 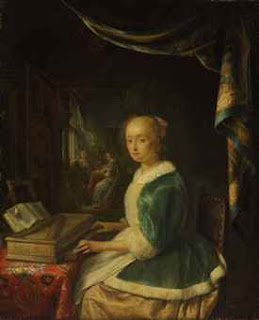 Gerrit Dou, Young Lady Playing a Clavichord.  This painting is alone reason to welcome auctions -- for a few days there's a chance to see a major work that had been "whereabouts unknown for generations," says the catalogue.  It turns out to have been owned by the same family for almost a century but apparently not exhibited (or cleaned) during that time.

Dou, a Dutch master of the small work, last year got a record $5-million-plus at Sotheby's.  Estimate: $1-$2 million. 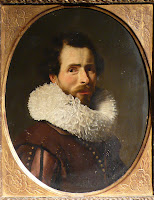 Thomas de Keyser, Portrait of a Gentleman.  Judging from this 1627 portrait, de Keyser should be a household name despite the missing flecks of paint and the clouded areas at the bottom and the right.  The face and ruff -- gorgeous.  Estimate: $300,000-$500,000. 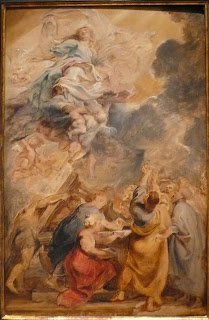 A couple of others to watch: a wonderful oil sketch, newly discovered, of The Assumption of the Virgin by the incomparable Rubens (left, estimate: $2-$3 million) and a 1756 double portrait of children by Francois Hubert Drouais (below, estimate: $1.2-$1.8 million).  Then there's a passel of works by Pieter Breughel the Younger -- landscape and fables copied from his father's work. 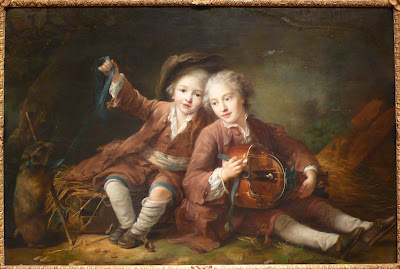 Image of Dou, from Christie's catalogue.

Other photographs and text Copyright 2012 Laura Gilbert.
Posted by laura at 7:36 PM