"Soutine/Bacon" at Helly Nahmad: Are Commercial Galleries the New Museums? 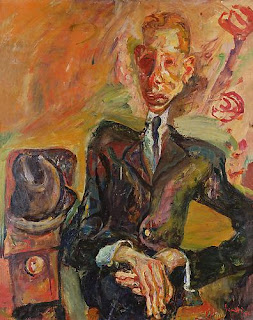 The "Soutine/Bacon" show is one of several presentations in New York that make you wonder, Do retail galleries do it better?

Like a good museum show, it's tightly focused.  It pairs paintings by Francis Bacon (his "Lying Figure" is below) with those of Chaim Soutine ("Portrait of a Man," above), whom Bacon considered a "formative" influence -- a fresh context for both.

And its subjects are compelling:  Two major painters with irresistible life stories -- Bacon the bad-boy homosexual, maybe the original Young British Artist way back when, and the peculiar Soutine, onetime Modigliani studio-mate notorious for his lack of personal hygeine. 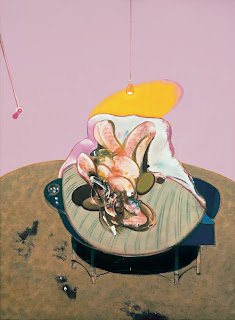 It's curated by acknowledged experts -- Maurice Tuchman and Esti Dunow, who co-authored the Soutine catalogue raisonne.  Tuchman used to head up the LA County Museum of Art, so he knows a thing or two about putting on a show.

It includes loans from a laundry list of major museums: the Albertina in Vienna, the Pompidou in Paris, the Tate, the Met, MoMA.  Of the 32 works displayed, a whopping 13 usually hang in museums.

And the show is, I was told by a gallery spokesperson, "completely noncommercial."  That is, nothing in it is for sale, at least for now* (note is at bottom).

On to the art. The pairing of Soutine and Bacon on the face of it makes perfect sense. There are obvious affinities: a shared debt to Rembrandt, figurative distortions, emotional intensity, and an obsessive, almost perverse attraction to animal slaughter.

Bacon was in Paris in the late 1920s and may even have seen Soutine's paintings of beef carcasses -- a persistent theme for Bacon, even indirectly; "we are meat," he said.  These paintings by Soutine were legendary, if only because he worked from the real thing, causing neighbors to complain about the stench.

A side-by-side comparison, though, does Bacon no favors. 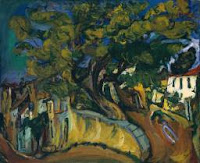 Seen here, Soutine's works are metaphorical, emotionally complex, sophisticated in composition, and lush in brushstroke and color, while Bacon's works tend to be literal, psychologically one-dimensional, and simply composed.  Aside from Bacon's brushy figures, his work is flat and dry.  This isn't to say that it doesn't have its own beauty, just that it's limited.

Soutine made everything anthropomorphic, including a fork stuck in a fish, and each painting embraces multiple psychological states.  A single portrait might be both regal and shamed, a landscape playful and terrorized (above left).  "Unflinching" describes even his still-lifes, which can be chronicles of pain (below). 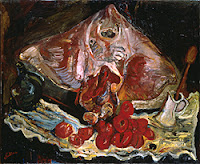 He constructed his paintings with a convulsive sophistication, from the prime focus out to the edges.  Then there are the meaty brushstrokes so favored by the Abstract Expressionists.

With Bacon (below), the emotional range is confined to rage, and it seems that he didn't always know how to enliven the canvas as a composition.  So sometimes we get flat colors, sometimes architectural lines that are traps, or a curved floor tilted up, another no-exit. 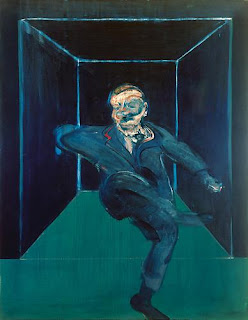 The exceptions here are Bacon's landscapes from the 1950s, which have a bold, experimental feel that encompasses the whole canvas.  Bacon's main interest, though, was the figure and flesh, which, compared with Soutine, too often fail to come alive.

Hats off to dealer Helly Nahmad.  "Soutine/Bacon" is a beautiful and welcome show.

At a time when museums are putting together home-grown shows including works that in flusher times would stay in the basement, the power-dealer show with major-museum loans -- this spring alone they can be seen at Mitchell-Innes & Nash, L&M, and Pace in addition to Gagosian and Helly Nahmad -- may be a harbinger of a power shift.

For good or ill, it's too soon to say.  The reality is that commercial galleries are in the business of moving inventory, and outside curators are not always disinterested.**

* The Gagosian Gallery makes the same claim about its current show, "Picasso and Marie-Therese," which also has museum loans and outside curators.  It bears mentioning that "Maya with a Boat" in that show had earlier failed to sell at auction in New York.  It's likely that at least some works in private hands from both these shows will hit the market again.

** A couple of years ago, the curators of "Soutine/Bacon" were involved in a lawsuit alleging that they had misled a seller about the market value of a Soutine.