"Rembrandt and His School": Revelations at the Frick 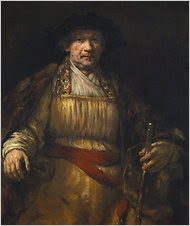 Rembrandt's art is always a revelation, and the works in "Rembrandt and His School," which opened yesterday and features some great drawings and prints in addition to up-close views of his paintings, are no exception. 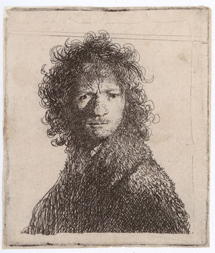 In sheer numbers, this is a major exhibit.  It showcases more than 60 works on paper -- 29 by Rembrandt (including an amazing series of self-portraits, one of which is shown right) and the rest by artists in his circle -- from the Fondation Custodia in Paris, which houses the collection of Dutch art historian Frederik Johannes Lugt.

Ten rarely displayed prints are up from the Frick's own collection.  The show also offers, at long last, straight-on views of five paintings, including the newly cleaned "Self-Portrait" (top), all of which came into the Frick as Rembrandts but two of which are now attributed to others.  You can finally stick your nose right up to "The Polish Rider," which for decades has been hung way too high to see.

Another rarity: Rembrandt's largest drawing, a landscape on loan from the Met that's displayed alongside a copy by one of his students. 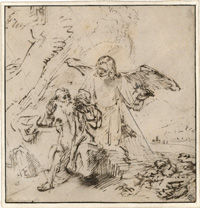 So there's a lot to look at, even in the Rembrandt drawings alone, which contain many of his worlds.  They span his career from the 1630s to the late 1650s (Rembrandt died in 1669, at 63).  In subject matter, they include landscapes, domestic life, religious narrative, and copies of work by other artists.  In style, they range from quick sketches to highly finished drawings. 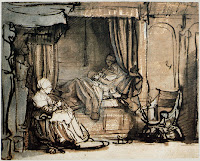 And there's a lot to learn -- how economically he could express action and create narrative ("Elijah with the Angel," above); how he built up a work in light and dark ("Interior with Saskia in Bed," right); how in landscape he recorded topography while imbuing it with unified emotion.

Always his strokes seem unstudied, even when he corrects himself, tempting us to believe that there's no distance between line and feeling.  Rembrandt, the magician. 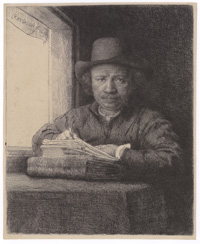 Then there are the loaned prints, which include eight self-portraits from the 1630s through 1648 (at right is the latest).  Rembrandt as courtier, as artist, as husband, by turns grimacing, somber, aggressive.  Seeing seven of them arrayed one next to the other (the eighth greets us at the beginning of the exhibition) -- it's nothing short of astonishing. 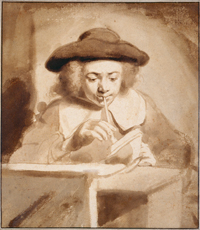 Works by artists in Rembrandt's circle are displayed in the next room.  Many of them were fine artists in their own right, including his students Ferdinand Bol, Gerbrand van den Eeckhout (his "Youth Smoking" is at left), and Govert Flinck, and his admirers such as Philips Koninck.  The show here has the benefit of recent Rembrandt scholarship -- the works were selected by Peter Schatborn, a Rijksmuseum veteran, who catalogued them and reattributed some of the works on view -- but Rembrandt/not Rembrandt is a still a work in progress. 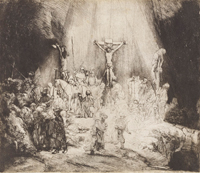 The Frick prints, exhibited separately, show Rembrandt as a complete master of portraiture, religious scenes, and landscape.  He used light and shade for almost incomparable dramatic effect but with great variety.  His inventiveness seems endless.  To look at the Crucifixion where detail is obliterated by light and then look at a landscape where light sets off detail -- well, it's sort of like falling in love all over again.  It's unbelievable that it can happen, but it does.

The Frick's Rembrandt paintings are ordinarily exhibited in a sort of Great Hall of Fame, interspersed among Turners, a Poussin, and other works without regard to art historical categories, and they hang high to clear the wainscoting.  For this show they are exhibited together in an intimate, semi-circular space so that it's possible to take them in from one spot, and you view them pretty much straight on. 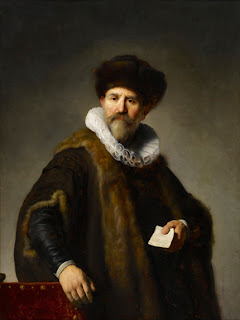 It's a magnificent sight.  To the left, a masterful portrait of fur trader Nicolaes Ruts from 1631 (right), when Rembrandt was in his twenties, with detailed attention to the appearance of things -- satin, fur, skin.  In the center, Rembrandt's late self-portrait (top) done up in rich 16th-century costume, with the suggestive brushstroke.  To the right "The Polish Rider" (below), that odd case in Rembrandt's oeuvre -- a latish work with too much detail -- if it's indeed by him.  The label acknowledges that some think the painting was "brought rapidly to completion by Rembrandt -- or another artist."  No matter. Whoever did it, it's splendid. 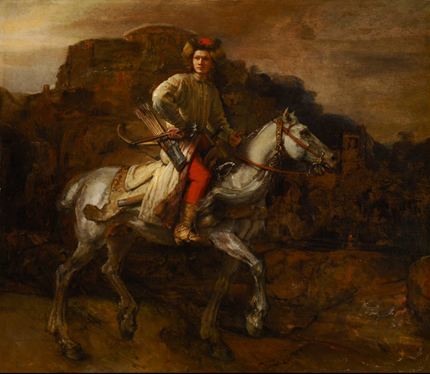 "Rembrandt and His School:  Masterworks from the Frick and Lugt Collections,"  The Frick Collection, 5th Avenue and 70th Street.  Through May 15.

Images:  From the Frick website.
Posted by laura at 4:27 PM