"Singular Visions": A Sometimes Magic Act at the Whitney

If an artwork is buck-naked, alone in an otherwise empty room, divorced from visual context, will boredom or a love match be the result?

That's the challenge set by the just-opened "Singular Visions."  The Whitney has set aside its entire fifth floor to show just 12 works from its collection, each in its own space, to permit, in the museum's words, "intimate and compelling encounters with a single work."

Intimate, yes.  Compelling, sometimes.  But when it works, it works very well. 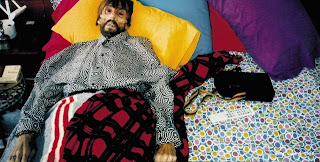 With AA Bronson's "Felix, June 5, 1994" (above), the encounter is almost literally striking.  Bronson's portrait of the AIDS-wasted Felix Partz a few hours after his death has been all over the internet -- this is the work the artist has requested be taken down from "Hide/Seek" at the National Portrait Gallery to protest the removal of David Wojnarowicz's video from that show.  ("Felix" is an edition of three; the Whitney has an artist proof.)  But the little thumbnail on the screen does nothing to prepare you for the experience of the actual artwork.

For one thing, it's huge, 7 by 14 feet, big as a billboard.  For another, the surface is in fact treated like a billboard.  The pixels are distinct, all blown up, flattening everything into pattern in a work already filled with patterns -- everything, that is, except the hands and face, which appear so compellingly, impossibly, alive.  The title of the work appears on the lower right, like a date stamp, fixing this moment into history.

"Felix" is in a room so small that it's impossible to back up far enough to make the pixels resolve or to take in the work as a whole.  It's a visual assault, and it's in accord with the artist's intent.  As the museum quotes the artist:  "I tend to exhibit it in quite small spaces so it completely fills your range of vision. . . . It totally takes over your senses and nothing else exists."

The Whitney performs magic with other of its artists as well. Georgia O'Keeffe's dreamy "Ladder to the Moon" (right) is in a jewel-box-like corner, bathed in subtle blue light.  Ree Morton's exuberant "Signs of Love" is spread out over two brightly lit walls.

There's a lot of gloom and mortality in the show.  Morton dead at 40.  Eva Hesse, represented by a spiderwebby latex rope sculpture found hanging in her studio after her death, age 34.  Paul Chang's digital animation with images of bodies falling from the sky, a post-9/11 meditation.  Ed Kienholz's dead old crone in "The Wait," surrounded by useless relics.

(I would have liked to include more images, including details of "Felix," but the Whitney, unlike the Met, does not permit photography of works in its permanent collection, and the press office has so far been uncooperative.  Those images that the museum has provided to the press are lousy; they dishonor the art.)

"Singular Visions,"  Whitney Museum of American Art, Madison Ave. at 75th Street.  The installation will remain on view for a year, with periodic substitutions.