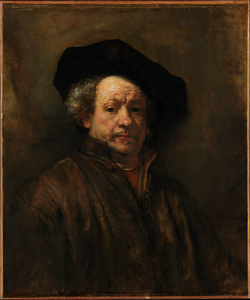 "Artists rarely had a chance of large-scale public commissions and hardly any possibility of salaried employment.    Consequently the art market was flooded with small easel paintings, prices were mostly ridiculously low, competition was fierce."

Sound familiar?  This is Margot and Rudolf Wittkower -- he's one of the great 20th-century art historians -- writing about 17th-century Dutch artists in their book Born Under Saturn.

Rembrandt and Vermeer supplemented their income with picture dealing, but many painters -- well- known names among those who have spent any time looking at Dutch art and some of the best of the "little masters" -- had occupations wholly at variance with being an artist.

"Jan van Goyen dealt in real estate and tulips, Aert van der Neer owned an inn in Amsterdam, Jan Steen a brewery in Delft and an inn in Leyden;  Jan van de Cappelle carried on his father's dyeing business; Jacob Ruisdael was a barber-surgeon and Joost van Craebeeck a baker; Philips Koninck owned a canal-shipping company and Hobbema held an appointment as a gauger of imported wine."

Artists are often asked, "Do you make a living at that?"  Day jobs -- they come with the territory whenever supply greatly exceeds demand.  This is quite aside from the fact that most of the art out there isn't worth a damn.
Posted by laura at 12:11 PM